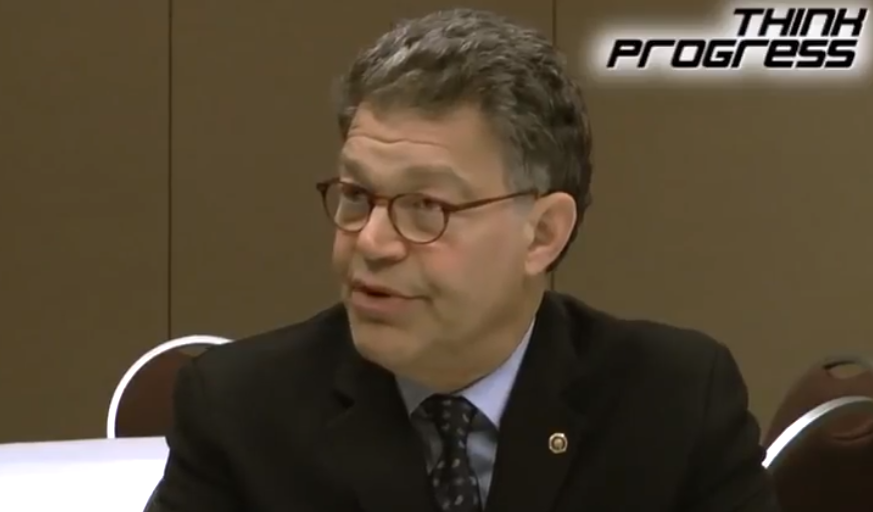 In 2011 Sen. Al Franken said Anthony Weiner‘s resignation was ‘the right thing to do.”

Franken made the remark in an interview with Think Progress when he was asked about an apparent double-standard in how Weiner had been forced to step down from his House seat while Sen. David Vitter of Louisiana was not, despite his involvement in the “DC Madam” scandal.

Franken acknowledged the “hypocrisy” in how the two elected officials were treated, but declared that Weiner was right to have stepped down:

He (Vitter) was reelected by the people of Louisiana so I think he should still be in the Senate. I do think there was a bit of sort of weird hypocrisy with such loud calling for Weiner’s resignation in light of the circumstances which there was all this visual evidence which was unpleasant to see… and obviously what he did I thought was.. um.. you know…. I think that his resig.., I think resigning was probably the right thing to do. But, there’s a lot of, guess what, hypocrisy there.

At the time of this interview, Anthony Weiner had only been accused of “sexting” with two women and sending explicit photos to them. This was well before “Carlos Danger” (that happened when Weiner was running for Mayor of New York a couple years later.)  This was also before the explicit exchanges with an underage girl that got Weiner thrown in a federal penitentiary.

At the time Franken said it was “the right thing” for Weiner to resign, the former New York Congressman had just sent pictures to some young women.

According to the “Franken Standard on Political Resignations” set in 2011, there is a huge similarity between Weiner then and Franken now. In Franken’s own words: “there was all this visual evidence which was unpleasant to see.”

So, what is the difference between Franken and Weiner, circa 2011? I can think of a few:

So, if a reporter has the interest, perhaps they should ask Franken a simple question:

Senator, in 2011 you said it was “probably the right thing” for Anthony Weiner to resign. Since he was never actually accused of grabbing women in a sexual way against their will, like you have, why was it right for him to resign then and not for you to resign now?