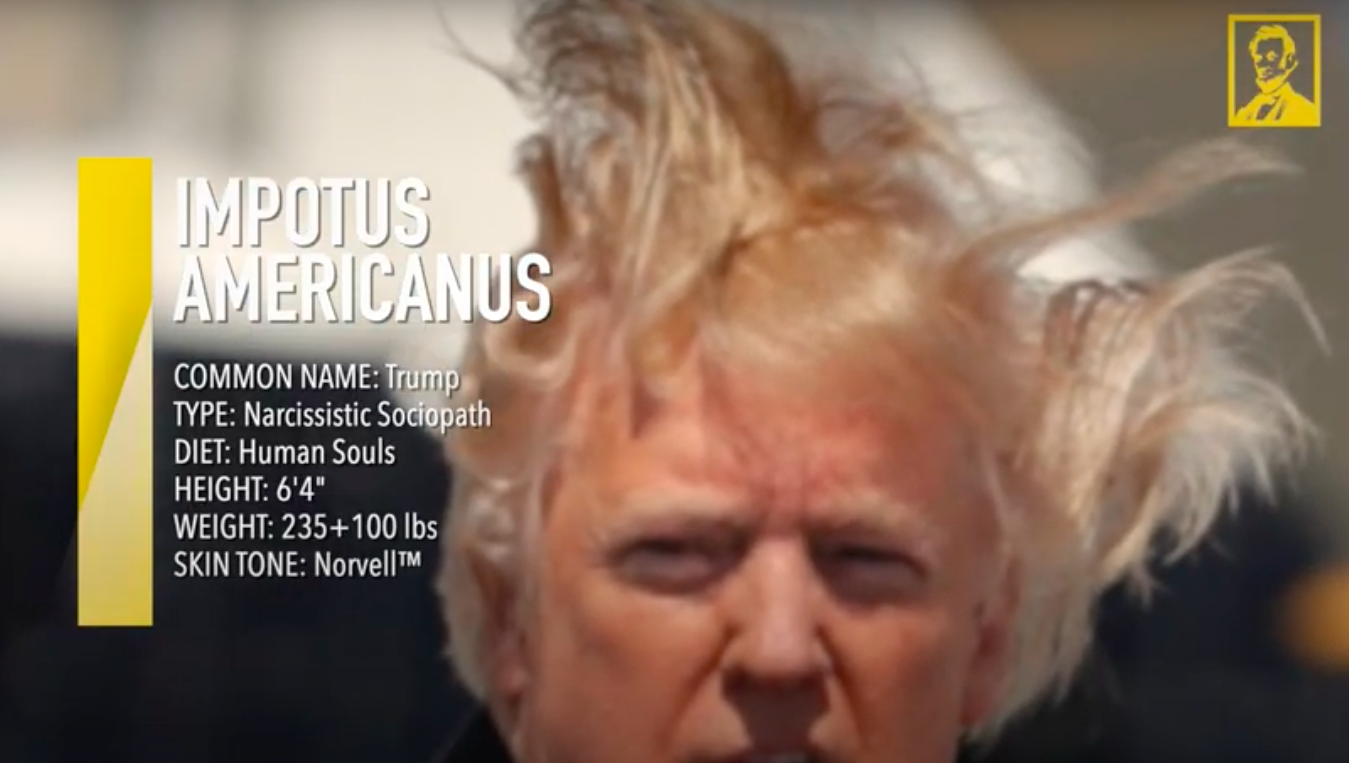 The anti-Trump PAC The Lincoln Project has been open about their goal to not just communicate with voters, but to pester President Donald Trump and distract him from attacking his Democratic rival Joe Biden. Their latest ad certainly seems designed to accomplish that latter objective, mocking Trump’s weight, “ruddy orange, not found in nature” skin tone, and age, dubbing him “Impotus Americanus,” calling him a liar, a failure, and corrupt.

The video is a satirical take on National Geographic nature videos, titled “Nationalist Geographic,” and introduces the Impotus Americanus with a video clip of Trump on the golf course, as text on the screen identifies him as a “Narcissistic Sociopath,” with a diet of “human souls,” a skin tone of “Norvell,” a manufacturer of spray tan products, and “notable for its exotic plumage” — as the video switches to a photo of Trump with his trademark swooping strawberry blonde locks disheveled by the wind.

“The ‘Trump’ is typically a ruddy orange color, not found in nature,” continues the narrator. The ad continues, saying that Trump was “once considered an alpha predator” and showing video of him with convicted creep Jeffrey Epstein. But his diet of “fast food” has led to “this elderly specimen” now “weighing somewhere over 300 pounds” — a number Trump would likely dispute.

The ad calls Epstein, who killed himself in prison after being convicted for his years-long scheme recruiting and grooming hundreds of underage girls for sexual assault, “Molestus Epstein,” a “scumbag” whose diet is now “dirt.”

The ad also calls Trump “the most corrupt of its species,” the “Oompus Loompitica,” referring to the short-statured and orange-hued factory workers from Roald Dahl’s book “Charlie and the Chocolate Factory.”

“Its tweeted cries of anger are meant to distract its prey from its failures as the leader of its pack,” concludes the ad. “The Impotus Americanus is considered endangered this November, due to its own incompetence and failure.”

In an online town hall with supporters Thursday night, Lincoln Project co-founder Rick Wilson discussed the philosophy behind ads like this.

“When you see the ads talking about Trump’s personal weaknesses, physical, mental, what have you, those are targeting one voter: Donald Trump,” said Wilson. “Now, we don’t troll Trump just for fun or to amuse ourselves — God knows, that would be a great job all day, ok? Trolling him would be a fabulous job, but we don’t do it just to troll him.”

Watch above, via The Lincoln Project.

Editor’s note: the author is a former political colleague and long-time friend of Rick Wilson.