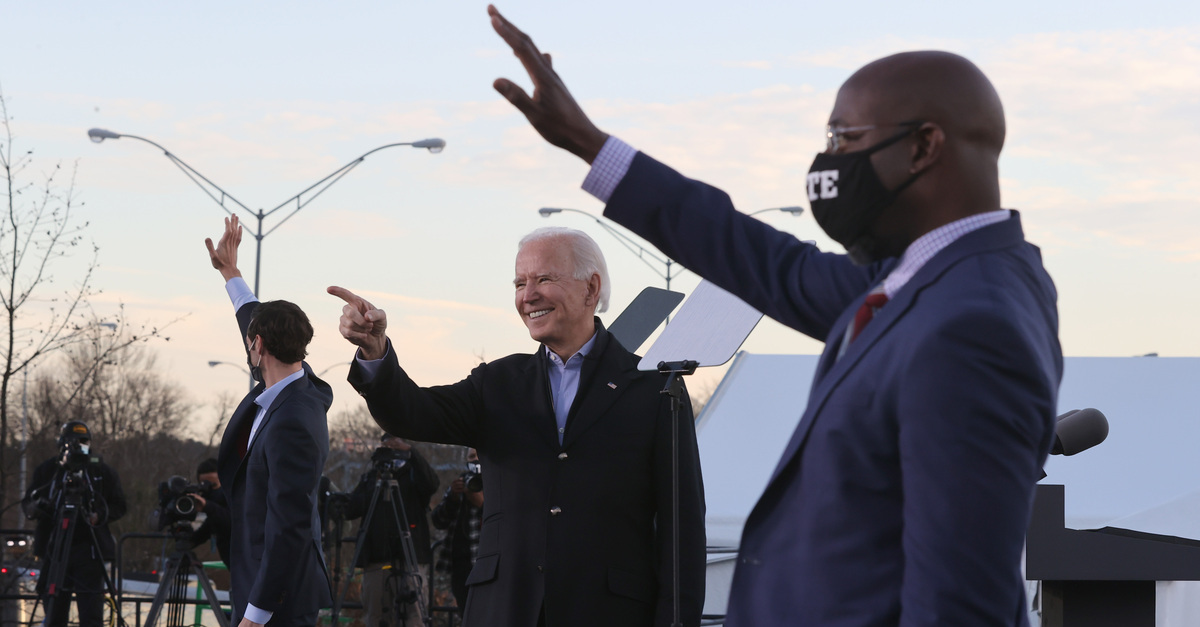 Oscar Zaro voted for the Democratic Party slate during the recent Senate runoff election. He lives in Hiram, Georgia, just outside of Powder Springs.

A Democratic voter in the typically red 14th Congressional District, which is currently represented by QAnon Rep. Marjorie Taylor-Greene, Zaro said that Georgians in the 14th were spurred on to vote more Democratic than usual this year due, in part, to the promise of “$2,000 checks” by Warnock and Ossoff.

“The last few weeks heading towards the runoff election, especially after Trump endorsed the $2,000 payments, Warnock and Ossoff made it a point to endorse and exclusively say ‘$2,000 checks,'” he said. “A lot of the people in my district voted blue in the runoff for two main reasons: (1) Loeffler and Perdue denying us relief during COVID while profiting millions themselves; and (2) $2,000 checks.”

“They really underestimate just how much people are hurting economically,” Zaro added, referring to Democrats who he views as reneging on their word.

Democrats on the campaign trail repeatedly referenced “$2,000 checks” during the final stages of the Senate runoffs — immediately seizing upon the populist issue after President Donald Trump threatened to veto the most recent stimulus package, in part, over a professed belief that the $600 payments were not generous enough.

“I don’t know where President Trump has been for the last eight months, while his allies in the U.S. Senate have been blocking this relief,” Ossoff said the same night the 45th president brought the issue to the fore. “Trump is, as ever, erratic and all over the place, but on this point, tonight, he’s right. $600 is a joke. They should send $2,000 checks to the American people right now because people are hurting.”

Trump made that threat on December 22. He quickly buckled and signed the stimulus into law on December 27. Democrats, sensing a golden opportunity and a winning issue, continued their pitch for “$2,000 checks” in Georgia.

A CNN article from January 4 recounting an election-eve rally in Atlanta for Warnock and Ossoff ran with the following headline: “Biden says electing Georgia’s Ossoff and Warnock would lead to $2,000 stimulus checks.”

“In Georgia, Democrats close with populist pitch vowing $2,000 stimulus checks,” declared the headline of an NBC News article from January 5 — again focused on that eleventh hour campaign swing by Warnock, Ossoff and the president-elect.

And Georgia voters, for their part, believed that “$2,000 checks” actually meant something to the effect of a check (or helicopter-dropped payment) for $2,000.

Rachel Kahn is a left-wing organizer and podcaster from Atlanta, Georgia. She reluctantly voted for Biden because the Peach State swung low enough for Democrats to capture in 2020. Kahn pointed out, however, that she voted enthusiastically in both the general and runoff elections for Warnock and Ossoff because of an “immeasurable hatred for David Perdue and Kelly Loeffler.”

“Frankly I just want them to feel sad,” she added, referring to the outgoing GOP senators.

While generally skeptical of the Democratic Party as a vehicle for progress, Kahn said the expectation for Georgia voters was that Biden and the two winning Senate candidates had sincerely promised them $2,000 checks.

“In my opinion as a person who does marketing, advertising, and public communications as my job, I would confidently say their messaging implied an additional $2,000, not $2,000 minus $600,” she told Mediaite.

While calling the “backtracking” on the stimulus amount and Biden’s apparent embrace of “austerity” politics “bad,” Kahn, who was born and raised in Georgia, said she wasn’t particularly surprised Democrats are now mounting a fine-print effort to explain away those earlier promises.

Other Georgia voters and organizers weren’t so sanguine about the Democrats’ quick volte-face on the meaning of “$2,000 checks.”

Rogelio Linares, who hails from Atlanta, canvassed innumerable Georgia voters as part of one service industry union’s massive outreach program on behalf of the Democratic Party during the Senate runoffs.

“I was on the ground and I knocked over 1,000 doors,” he told Mediaite in an interview. “At the doors, I was literally telling people, ‘$2K checks, you can rely on this.’ I’m a man of principle and morals and I feel like shit. I lied to them. I was lying to them the whole time. I was lying to people that were relying on this. At the time I didn’t know it was a lie. But that was not the reality.”

Linares consistently reiterated that many Georgia voters feel taken advantage but crestfallen because there’s essentially nothing they can do about the Democratic Party’s abrupt reversal on the amount of direct aid currently being proposed.

“This is pretty much a betrayal of the working class,” he said.

“I know people are pissed off about it,” Linares continued. “People are very mad about it. We are so on our knees as a country–we don’t have much leverage. The working class, small businesses [who are] getting hammered. I’m pissed off, Everyone’s pissed off, union workers are pissed off. It’s sad. It’s absurd. It’s disgusting. But there’s not much people can do.”

During Biden’s last-minute pitch to Peach State voters, the incoming president promised that “$2,000 checks will go out the door” in the event that his fellow Democrats defeated their GOP rivals. Video of that apparently-flexible promise has since gone viral in the aftermath of palpable online outrage.

Promises made by Warnock and Ossoff are being highlighted as well.

A popular video shared by independent journalist Eoin Higgins begins with Ossoff saying: “We will be able to pass $2,000 stimulus checks for the people next week when we win these races in Georgia and get economic relief directly into the bank accounts of the people who are suffering right now.”

I don’t know you tell me what this says to you pic.twitter.com/9BsCKwQepc

The following image was shared by Warnock in the waning days of the campaign:

The check in this campaign ad sure doesn’t fucking read $1,400.00. pic.twitter.com/qReorINQaH

A second clip from the above video shows Biden speaking directly to Georgia voters and reiterating his support for checks in the amount of $2,000.

“By electing Jon and the reverend, you can make an immediate difference in your own lives and the lives of the people all across this country,” the president-elect says. “Because their election will put an end to the block in Washington on that $2,000 stimulus check. That money that will go out the door immediately to help people who are in trouble.”

“Look at Ossoff’s tweets. Look at Warnock’s tweets,” Linares frustratedly went on. “They say ‘$2K now.’ First of all, that’s lying. That’s not transparency. Everyone I know who hears about it ends up being outraged.”

When asked if the voters he spoke with during his weeks-long door-knocking efforts expected a check from Biden for $2,000, he answered adamantly in the affirmative.

“One hundred percent,” Linares confirmed. “There’s no denying that. Myself included. The union I work with who had thousands of people on the ground, they were relying on that as well. People were definitely relying on those $2K checks.”

“We were talking about $2,000 checks daily,” he continued. “We were pitching $2K checks because that’s what the campaigns were pushing as well. They were tweeting about it nonstop, posting on Instagram about it nonstop, the senators-elect themselves. They stabbed people in the back. The majority of people I worked with left their jobs for a month. They put their lives on hold and then [the incoming administration] went and stabbed them in the back.”

The Biden Transition did not respond to multiple requests for comment. But some commentators have pushed back against the disappointment.

Matt Stoller, a Federalist Society contributor and fellow at the Open Markets Institute, who until recently, was a well-known booster for Sen. Josh Hawley (R-Mo.), heaped scorn on working class critics of Biden’s $1,400 gambit.

“I think lefties really need to consider how their dishonest framing of the $2000 direct payment damages their credibility,” he tweeted on Friday. “Joe Biden really wanted to deliver on this lefty priorities [sic], and lefties went after him for doing that. Why should Biden listen to lefties going forward?”

While the online left has always been something of a tough sell for the centrist politician, Georgians surveyed by Mediaite suggested that Biden should listen to his own statements made just before their state’s high-profile and highly-consequential runoff elections if he wants to maintain the goodwill of voters there.

Justin Wade is from Tucker, Georgia — a city located in vote-rich DeKalb County. He said attempts by party faithful to defend Biden’s $1,400 proposal made no sense in the context of the half-billion-dollar campaigns Democrats ran in his state.

“I’m from Georgia and I voted for Ossoff and Warnock in the January runoff elections,” he told Mediaite. “Prior to the runoff, I saw numerous ads and statements promising $2,000 stimulus checks. Many of these were made after the $600 checks went out. On January 4th, the day before the runoff, Biden said if Democrats win Georgia, ‘$2,000 checks will go out the door.’ Considering he said this after many of the $600 checks had already gone out, it would’ve been crazy to think that he actually meant $1,400 checks.”

Wade also expressed concerns about how Biden’s broken promise augurs for the future of his administration.

“Warnock, Ossoff, [Vice President-elect] Kamala [Harris], and others have all pushed for $2,000 checks, but none of them have called on Biden to push for $2,000 checks in addition to the $600 checks,” he said. “Considering the Democrats control Congress and the presidency, they could’ve pushed for more if they wanted to. This is a bad sign for how they will govern for the next four years.”

Anger at the quick turn is rife and could lead to electoral problems down the road in the recent and perilously blue state, Georgians insist.

“I definitely interpreted Warnock and Ossoff’s many advertisements and interviews where they spoke explicitly of getting people ‘$2,000 checks,’ as meaning $2,000 checks,” Atlanta, Georgia-based YouTuber Mac Holmes told Mediaite. “If they meant $1,400 on top of the previous $600, why continue advertising $2,000 checks after the $600 was already passed? That’s at best misleading and at worst an outright lie.”