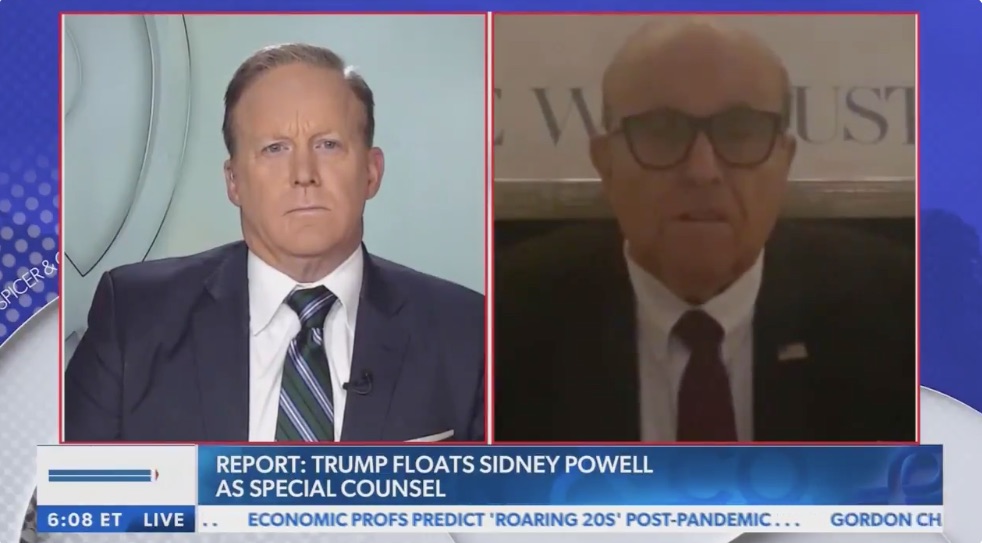 Donald Trump’s personal lawyer and quixotic leader of the campaign to overturn the 2020 election, Rudy Giuliani, labored to distance the president from fellow legal conspiracist Sidney Powell, even though she has visited the White House in three of the last four days.

During an appearance on Newsmax’s Spicer & Co, Giuliani insisted that Powell was acting independently and was not associated with his official efforts on behalf of Trump, despite those visits.

Four people briefed on events said Sidney Powell was back at the White House again today, for third time in four days.

Sun: Powell returns to the WH

“Let me say definitely that Sidney Powell is not part of our legal team, she hasn’t been for 5 weeks,” Giuliani told host Sean Spicer after the Newsmax host noted her frequent, face-to-face meetings that have been reported in the press. “She is not a special counsel for the president, she does not speak for the president, nor does she speak for the administration. She speaks for herself. She’s a fine woman, a fine lawyer. Whatever she’s talking about is her own opinion. I’m not responsible for it, the president isn’t, nor is anyone else on our legal team.”

Giuliani’s reference to “special counsel” came after news reports that, during Powell’s Friday Oval Office audience with the president, he reportedly floated the idea of naming Powell as special counsel to investigate election fraud — a move that it should be pointed out is beyond Trump’s authority, since, by regulation, only the attorney general can appoint a special counsel.

However, just moments later, Giuliani appeared to subtly cast aspersions on Powell’s legal strategy. “We’re going to be extremely aggressive, we’re going to fight for our client as hard as we can,” he added. “But we’re also going to do in within the bounds of rationality, common sense, and the law. And it can be done. There’s no reason to go beyond anything.”

This isn’t the first time Giuliani has ruled out Powell having an official role in the legal fight, as he claimed the pair were “pursuing two different theories” just before Thanksgiving. Still, Giuliani’s disavowal rings hollow, since Powell continues to have the president’s ear and, just days before his earlier disavowal, Giuliani and Powell held a surreal, joint press conference where he stood beside her as she pushed delusional election conspiracies involving George Soros, Hugo Chavez, the Clintons, and Antifa, among others.