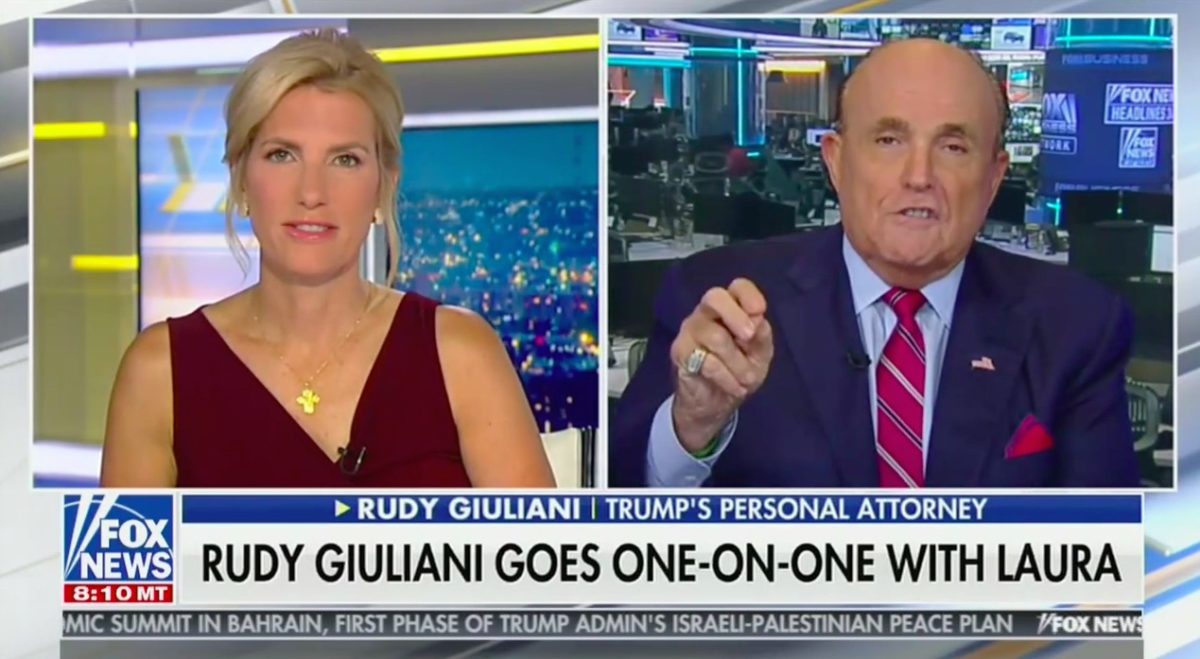 Rudy Giuliani made yet another outlandish claim in his latest appearance on Fox News, during which he claimed that he cancelled his previously announced oppo research trip to Ukraine because the new president of that country, who is Jewish, is “surrounded by Soros people, Democrats, and people trying to set us up.”

Speaking to Laura Ingraham, Giuliani, President Donald Trump’s personal attorney, did not provide any evidence to back up these incendiary charges, which not-so-subtly trafficked in anti-Semitic tropes that right-wing groups frequently use to smear Jewish billionaire George Soros. Notably, Giuliani’s comments came just one day after Ingraham’s show listed a virulent anti-Semite and white supremacist as among a group of “prominent conservatives” whose voices were being unfairly silenced by mainstream social media platforms.

In early May, the notoriously gaffe-prone Giuliani announced his intention to visit Ukraine to discuss the origins of the FBI investigation into Russian influence on the Trump campaign and to learn more about a criminal inquiry into former Vice President Joe Biden’s son, Hunter. During an interview with the New York Times, Giuliani openly acknowledged that his trip was aimed at “meddling in an investigation” to gain potential opposition research for his client’s 2020 presidential bid.

After a broad outcry, the Trump campaign cancelled the trip.

Ingraham seemed to repeat this previous explanation for why Giuliani didn’t go, saying: “But they called you off that, though. You were going over there.”

“I didn’t go over there because they surrounded the present president of the Ukraine with Soros people, Democrats, and people trying to set us up,” Giuliani replied. “I was going over there to make sure they investigate the Ukrainian collusion with Hillary Clinton’s people.”

“Are you going to still try to go?” Ingraham asked.

“I will go when I am sure they won’t misstate why I am going there,” Giuliani responded.

But just last week, Giuliani acknowledged he had a meeting in New York City with a former Ukrainian diplomat who has pushed a conspiracy theory that the Hillary Clinton campaign, US Embassy officials in Kiev, and the Ukrainian government worked together in 2016 to dig up dirt on the Trump campaign. All parties involved have strongly denied the diplomat’s claims.

Watch the video above, via Fox News. (The relevant portion begins at the 7:15 mark.)