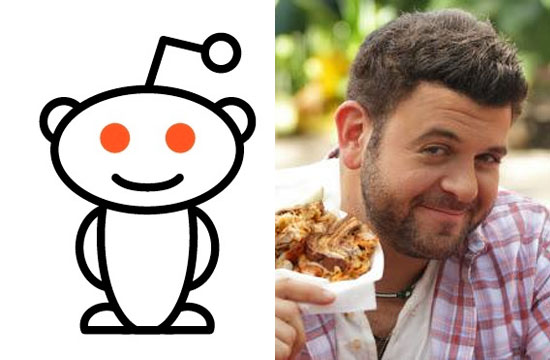 Anthony Bourdain was the first to find an impostor claiming to be him on the internet board Reddit; now Adam Richman has one too. Last night, someone claiming to be the Man vs. Food host began taking questions on Reddit’s popular Ask Me Anything (AMA) board — until the real Adam Richman shot him down: “THIS IS A FAKE!!! PLEASE RT!!! DO NOT BELIEVE THIS LIAR!!!”

By that point, the fake Adam Richman had already begun answering questions, though many users called him out immediately. Specifically, Fake Richman never provided verification of his identity to the moderators, nor did his answers sound authentically Richmanesque.

Here’s an answer from an interview we conducted with him in October:

Tell us about the upcoming World Food Championships, which you’re hosting in Vegas.

Adam Richman: The World Food Championships was basically the brainchild of the Agency of Record, who had all the big recognized food championships — well, I don’t want to say all, because I’m sure there’s probably like a really good competition in Latvia that is not involved — but then again, it’s not really the World Series if everyone competing is from America… I digress.

I love your show! I know you don’t do the food challenges anymore. Aside from the obvious, why did you stop? It was a very appealing part of each episode.

To go work on other things.

Naturally, shortly after he was called out, the fake Richman disappeared from the internet and back into his basement, never to be heard from again.