All the 2015 James Beard Award Winners, One Liners, No-Shows

All The Winners, No-Shows, and One-Liners from the James Beard Journalism Awards 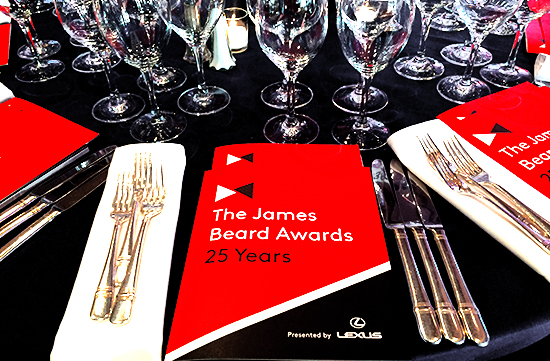 By the time the last plate of Thomas Lent’s tender beef rib (with Brassica variations!) was cleared, the James Beard Foundation doled out medals in more than 40 categories for radio, video, books, and blogs. And while not everyone showed up — including some boldface winners like Anthony Bourdain and Ina Garten — those who did, like Blue Hill chef Dan Barber and the Washington Post’s Tamar Haspel had some of the night’s most moving speeches and zingers. Read those, and all the winning articles, below.

The India Issue by the editors of Saveur

“Against the Grain“ by Michael Specter who did not attend.

“Unearthed“ by Tamar Haspel, who told the crowd. “My husband can totally take Dan Barber‘s wife,” Tamar told the crowd, after the Blue Hill chef was a little too effusive in glorifying his spouse.

Food Coverage in a General-Interest Publication

“The Quinoa Quarrel: Who Owns the World’s Greatest Superfood?“ by Lisa M. Hamilton who did not attend.

“Cabbage Craft“ by Kathy Gunst whose Eating Well table screamed the loudest of the night.

“Giving & Thanking“ by Ben Schott. “I’m speechless, in that I don’t have a speech,” Schott told the crowd, before thanking Bon Appetit for giving him the opportunity as an Englishman to put Americans in their place.

Orangette by Molly Wizenberg. Wizenberg left anthropology studies to pursue blogging, and noted her only dream when she got started was to one day become Dorie Greenspan‘s assistant. Even now, she still wants the job.

“Life in Chains: Finding Home at Taco Bell“ by John DeVore who thanked his mother for the inspiration.

“Élite Meat“ by Dana Goodyear, who did not attend, but whose editor accepted on her behalf. “I’m not Dana because I’m not blonde,” her editor joked, while also humble noting “Food is not a high priority at The New Yorker.”

Wine, Spirits, and Other Beverages

“Into the Vines” by Gabrielle Hamilton, who did not attend.

“Artisanal-Everything Roberta’s Defies the Stereotypes,” “Once an Icon, Per Se is Showing its Age,” and “Six Reasons Why Cosme is One of NYC’s Most Relevant New Restaurants“ by Ryan Sutton who did not attend, and whose editor accepted on his behalf.

The Feed Podcast by hosts Rick Bayless and Steve Dolinsky, who described their show as a “kneejerk reaction to terrestrial radio.”

Hidden Kitchens World hosted by The Kitchen Sisters, who thanked all the world’s secret and dissident kitchens.

Food Chains hosted by Forest Whitaker, who did not attend. The producer accepted, saying this was the easiest part of the easiest job on the film.

Martha Stewart’s Cooking School hosted by Martha Stewart, whose presence received the most cellphone pics of the night.

The Mind of a Chef hosted by Anthony Bourdain, who did not attend. Zero Point Zero accepted on his behalf.

food.curated hosted and produced by Liza de Guia, who beamed how her film on the baker behind Jersey City’s Razza could shine a national spotlight on a small town pizzeria’s business.

Ina Garten, host of Barefoot Contessa: Back to Basics, who did not attend.

Barbara Kafka, the microwave cooking pioneer, whose husband accepted on her behalf.

Yucatán by David Sterling, who is obsessed with the Amazon rankings of his 6.5 pound, 576-page tome that was inspired by a meal of smoky pork belly on the Mexican peninsula.

Flavor Flours: A New Way to Bake with Teff, Buckwheat, Sorghum, Other Whole & Ancient Grains, Nuts & Non-Wheat Flours by Alice Medrich who did not attend.

Liquid Intelligence: The Art and Science of the Perfect Cocktail by Dave Arnold. Arnold said this is his first award for anything ever, and he thanked his wife for translating his book from “gobbledygook to English.”

Cooking from a Professional Point of View

Cooking Light Mad Delicious: The Science of Making Healthy Food Taste Amazing by Keith Schroeder, who told the story of being discovered while scooping ice cream at Food Blog South.

The Kitchen Cookbook: Recipes, Kitchens & Tips to Inspire Your Cooking by Faith Durand and Sara Kate Gillingham who were the only winners to thank the other people nominated in their category, adding “any book… that helps make one person to make a meal they otherwise wouldn’t, is a contribution to healing and peace in world.”

In Her Kitchen: Stories and Recipes from Grandmas Around the World by Gabriele Galimberti who did not attend.

Butchering Poultry, Rabbit, Lamb, Goat, and Pork: The Comprehensive Photographic Guide to Humane Slaughtering and Butchering by Adam Danforth, who was most grateful for “alcohol and beta blockers.”

Bitter: A Taste of the World’s Most Dangerous Flavor, with Recipes by Jennifer McLagan who did not attend.

At Home in the Whole Food Kitchen: Celebrating the Art of Eating Well by Amy Chaplin, who spent 2.5 years writing the book.

The Third Plate: Field Notes on the Future of Food by Dan Barber. “I represent two of the five worst guys to be married to,” Barber said, having read a list that ranked low writers and chefs, before thanking his wife for both her love and discipline.