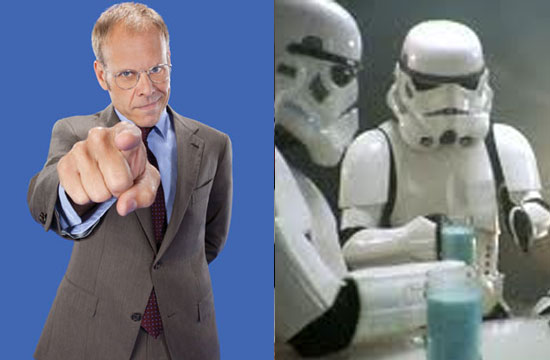 In Star Wars, the only thing more iconic than tauntauns, X-Wings, Death Stars, lightsabers, and bantha poodoo…is the blue milk. Though it makes a brief appearance in the very beginning of A New Hope (along with Aunt Beru and Uncle Owen), it’s apparently captured the imaginations of millions of Star Wars fans who want to see it return in the next group of Disney-produced sequels. There’s only one problem, according to Alton Brown: “It ain’t milk.”

Unfortunately, there’s some science behind the reasoning. As he explained to Wired in a roundup of things famous nerds wanted in the new Star Wars movies, it involves a bit of cellular structure biology, mixed with with some spectral physics:

All milks are colloids, essentially water in which protein spheres and fat globules are held in suspension. The protein and fat scatter visible light in such a way as to appear white. Now, skim milk can look bluish, because without much fat more light bounces off small clusters of protein mol­ecules called casein micelles, which tend to scatter shorter (blue) wavelengths. But even if it were completely fat-free, milk could never look that blue.

And why would farmers have fat-free milk anyway? It makes no sense. You could argue that the milk on Tatooine contains some completely alien protein, but even then you’d have to explain where the heck this blue milk came from. Clearly, this is a desert planet with no signs of herding animals ­capable of being milked by ­humble farmers. Bantha? Ha!

But it could be plausible! Alton speculates that the blue milk could be a vegetable milk, like Tatooine soy — and that Luke Skywalker’s adopted parents were vegans. “This would explain their dour, grumpy demeanor,” he notes, “and as we see later from their remains, they’re already suffering considerable loss of bone mass. I rest my case.”