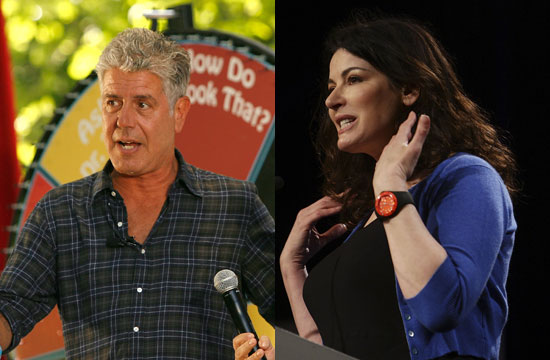 As much as we think that Anthony Bourdain and Nigella Lawson are pretty cool cats, we’d be peeved if we had to continue calling their new cooking show, well, “New Cooking Show“. Which is why we’re happy to know that their new joint cooking competition venture has a name and a format!

Officially called “The Taste,” the eight-episode series has Lawson and Bourdain heading up a panel of four judges as they focus exclusively on how food tastes. That’s right. There ain’t no brownie points for Bocuse d’Or-level presentation, or clouds of dry ice smoke, or foods that look like other foods but really are not those foods. In other words, Lawson and Bourdain are looking for people who can cook food that tastes amazing — home cooks, restauranteurs, what have you. (And of course this works for television, because no one can convey orgasmic hedonism on camera quite like those two.)

According to the press release, Bourdain and Lawson — he of the “trademark of holding nothing back” and she of the “extensive culinary experience” — will mentor two handpicked teams of contestants throughout the competition as they receive training from some culinary industry leaders. Each episode, the contestants will compete in both a team and an individual challenge, and at the end of each episode, the two judges must decide who to send home.

So basically: this is Top Chef if Bourdain judged all the time, plus Food Network Star, plus the love child of Julia Child and LeBron James. Does that make you want to apply? Because you should. And then you should give us credit if you make it on the show.