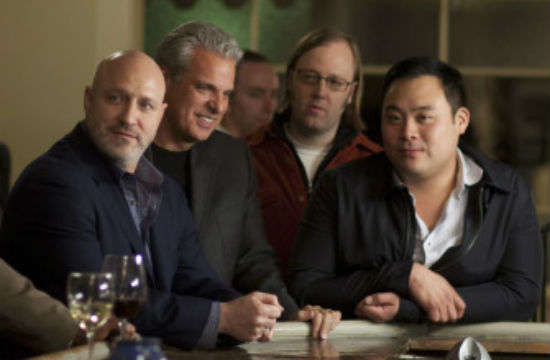 And, naturally, because we’re weak-hearted and sentimental girls here at The Braiser, we’re completely obsessed with the developing steamy romance between Chef Janette Desautel (played by Kim Dickens) and her sous chef Jacques (played by Ntare Guma Mbaho Mwine). While we had Tony’s ear on the red carpet, we had to ask: did we have him to thank for pairing them up?

“I was really resistant to the idea. I think David Simon talked me into that,” he admitted. “It’s just something you would never do — sleep with your sous chef. It’s just really wrong. But, in retrospect? I just bumped into the actor who plays Jacques out in LA, and I said, ‘Having seen it play out, now I’m really happy that we went that way.'”

Fair enough. He also obliged to give us a juicy bit of scoop we weren’t expecting, but were all too glad to hear.

Says Bourdain, “I will tell you, the food aspect? The restaurant subplot? It gets bigger and bigger. There’s another chef who has not been on the show before who has an appearance coming up, and he’s so awesome in it. He’s the last person in the world you’d think I’d have on the show.”

You may speculate wildly in the comments below.