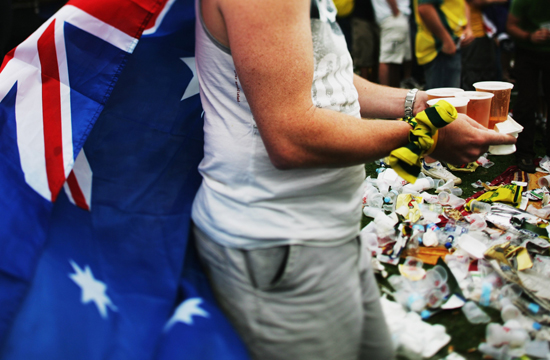 Australian scientists and humanitarians have just discovered a method of brewing self-hydrating beer — that is, beer that prevents its drinkers from becoming dehydrated, thus countering the cause of extreme drunkenness and (most importantly) hangovers. The best part: it even still tastes like legitimate beer. This is the best invention that we have ever seen (suck it, Nikola Tesla) and the best news that we have ever heard in the history of everything ever.

While Australians are a notoriously drunken bunch, they still retained enough neurons to realize that by manipulating the electrolyte level in beer, the sports drink compound might be able to help the body retain hydration. Most of alcohol’s miserable side effects come from its ability to deplete electrolytes from the human body, leading to alcohol turning your body into a desiccated sponge of flesh and bone, shuddering and hissing and screaming for mercy.

Nutrition researchers from the Griffith University’s Health Institute then created an electrolyte-heavy version of two commercial beers — one light, one regular — and gave them to their research subjects after vigorous exercise to test fluid recovery. (Best Medical Study Ever Award!) Unsurprisingly, the light beer led to quicker re-hydration, but the electrolyte-jacked light beer performed even better — up to a third more effective than regular beer.

However, in a public safety buzzkill move, associate professor Ben Desbrow told the Australian Associated Press that just because it’s less likely to SUCK ALL THE MOISTURE FROM YOUR BODY LIKE THE DESERT SAND, getting smashed on special beer because it’s got electrolytes is “definitely not a good idea”:

“But what we’ve found is that many people who sweat a lot, especially tradesmen, knock off work and have a beer. But alcohol in a dehydrated body can have all sorts of repercussions, including decreased awareness of risk.

“So, if you’re going to live in the real world, you can either spend your time telling people what they shouldn’t do, or you can work on ways of reducing the danger of some of these socialised activities.”

With all due respect, Prof, we’d rather live in a real world where alcohol not only prevents its own hangovers, but also gives us the ability to win bar fights, repel bullets, fly, read minds, shoot lasers from our mouths, etc. Just put some more electrolytes in the effing beer.