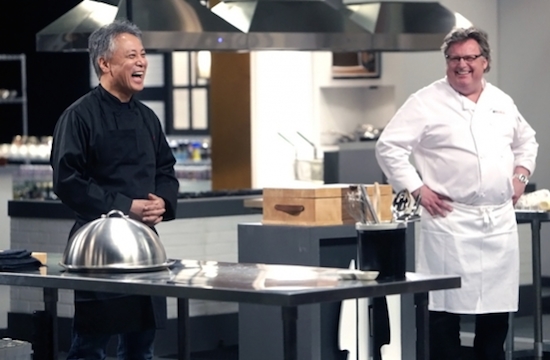 These Top Chef Masters competitors and long-time friends take the duel to a whole new level. Takashi challenges David with an ingredient for which he is well known, the egg. David reciprocates with a test based on crab that must be prepared three ways. Then for the Duel, guest judge Andrew Zimmern offers up some of the most bizarre ingredients for their meal. Having to cook with unfamiliar products will push these Masters to their culinary limits.

Accolades Between Chefs: Lots and lots of them. Burke has basically done everything under the sun; most recently, “the David Burke Group was recognized by Restaurant Hospitality magazine as having one of the ‘Coolest Multiconcept Companies in the Land,'” according to his bio. Burke was also on season two of Top Chef Masters. Yagihashi was nominated as a James Beard Best Chef: Midwest in 2003, and his restaurant, Takashi, got its third consecutive Michelin star in 2013. He too was on Top Chef Masters, season four.

Number of Predicted Meltdowns Between the Two Competitors: Zero. They’re not exactly hotheads in the kitchen.

Will This Make for Good TV: Good for the food geeks, bad for the drama queens. And also ANDREW ZIMMERN, who makes everything more fun and nerd-tastic.

Who Would Win in an Actual Food Fight: We think Burke would have a good throwing arm, but they’re so chummy together! It’s kind of adorbs.

Who Will Win: This is not an easy match for us to predict: two equally strong competitors, with different skill sets. However, Burke seems poised for challenges that come down to the basics, while Yagihashi has a stronghold in Japanese cuisine. Based on the appearance of Zimmern and his wacky ingredients, we think Yagihashi could have a better chance to take whatever weirdness is thrown at hime and run with it.

*Update: We were correct! Congrats, Yaghihashi! We are now four for five, not too shabby.