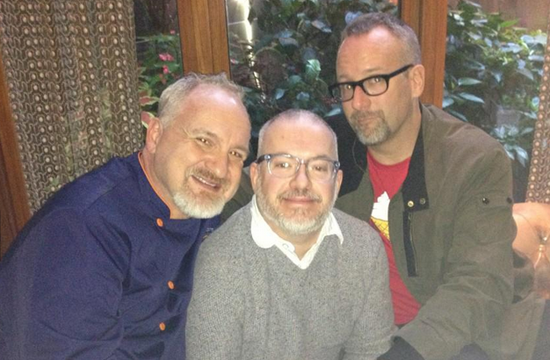 A long time ago in New York, Art Smith met Doug Quint and Bryan Petroff of Big Gay Ice Cream for the first time (which we may have facilitated). Months later, the three are teaming up in South Beach to throw an enormous, decadent (yet family friendly!), and totally free ice cream party with a purpose: bringing attention to the burgeoning issue of gay marriage rights in Florida.

Held this Saturday at the James Hotel in Miami, close to the official South Beach Food and Wine Festival itself (it’s unaffiliated), the Big Gay Ice Cream Social (of course) will feature tropical ice cream sundaes from Miami’s Real Sorbet (and “adult” soda floats from Big Gay Ice Cream), as well as food from chef Kris Wessel of Florida Cookery, and mysterious guest food celebrity attendees, which Quint coyly teased in an interview. “I’m not going to be the guy that says that ‘somebody’s going to show up,'” he said. (We know, that’s Art Smith’s job.)

But despite the festive nature of the party — even with the maybe-appearance of Quint in a speedo — there’s a reason that Smith, a prominent gay rights activist, and Big Gay Ice Cream, self-evident proponents of gay marriage, have taken this party to Florida: “Florida is the next battleground state for marriage equality,” Quint explained in an email, “so Art is doing all he can to raise awareness of that and drum up support.”

Currently, Florida’s constitution bans gay marriage outright, thanks to a 2008 amendment enacted through a ballot initiative. But five years later, the margin between gay marriage supporters and opposers is thinner than ever: a recent poll from Quinnipiac University found voters’ opinions “nearly evenly divided,” with 43 percent in favor and 45 percent opposing. (Younger voters overwhelmingly support gay marriage, with 66 percent of voters under 29 in favor.) And with the next election taking place in 2014, Quint believes that the sooner they raise awareness of the issue, “the higher the majority will be.”

“It’s time for people to get talking in Florida,” Quint said, noting that they had more than a year before gay rights could be put up for referendum. “There isn’t a ballot measure on this issue yet…but the more we get people talking about this issue this far in advance, the more people come over to what we believe is the correct line of thinking.”