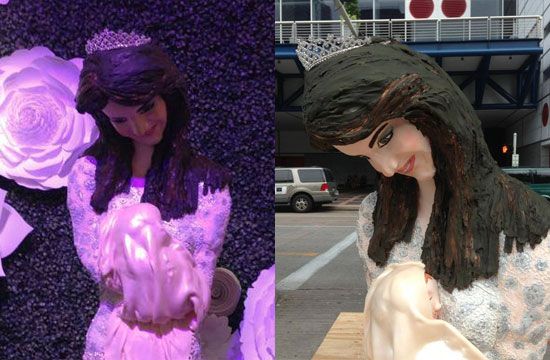 Image credit: Who Made The Cake!/Facebook

Something just came out of Kate Middleton’s womb, and we hope that it looks ABSOLUTELY NOTHING like this disturbing cake version of the Duchess of Cambridge. A Houston cake designer channeling her inner Duff Goldman/Sandra Lee demon has created what can only be described as a cross-breed between Kate Middleton, a cake, and a vulture.

In honor of the new royal baby that clawed its way into existence, Who Made The Cake! owner and baker to the stars Nadine Moon created this life-sized version of Kate Middleton holding what we assume is a baby, and not a shamanistic totem that contains the baby’s life-essence to be raised by a hobgoblin.

In explaining her creation to ABCNews.com, Moon called the Princess Kate story “everyone’s fairy tale,” which she has tried to realistically capture. “I think she’s such an inspiration to so many brides,” she added, “and we thought it was a neat thing to honor her and do a life-size tribute to her in cake and Rice Krispies Treats with the baby.”

To fully pay tribute to the Duchess and her mewling newborn, Moon offered to ship Cake Middleton (TM Jezebel) to Kensington Palace, so Kate Middleton can symbolically eat her own placenta.

No, really, they might actually ship Cake Middleton to Kensington Palace:

The life-size cake took Moon and her team a week to build before it went on display today at the Bridal Extravaganza Show in Houston. The show’s officials have reached out to Kensington Palace to see if the mom-to-be and the royal family would like the cake shipped across the pond.

“If Kensington Palace says yes, it will be shipped off to London,” Moon said. “I would need to go with it and assemble it there.”

Susan Risdon, spokeswoman for the Bridal Extravaganza Show, told ABCNews.com that she has been emailing back and forth with Kensington Palace since Wednesday about the opportunity to bring Cake Kate across the pond.

And that was when the cake demon swapped places with Kate, trapping the soul of the beautiful princess in dense butter pound cake for all eternity while the cake demons walked the earth in the Royal Skin. (Occasionally, one can see the cake weep bitter tears of royal icing for her lost child and her deformed neck.)