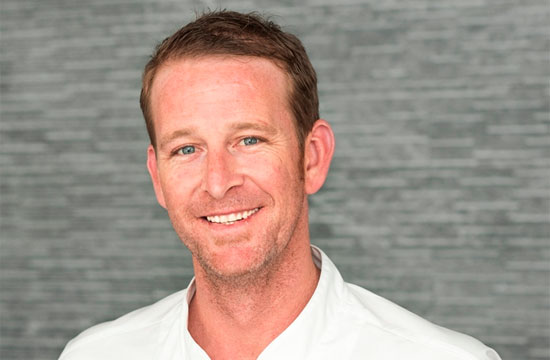 Somewhere in Los Angeles (okay, it’s right here), Top Chef alumnus CJ Jacobson has finally opened his first restaurant, Girasol. He’s known for being notoriously tall and incredibly inventive (we wanted him in the finals with Kristen Kish during the last season), and with the highly sophisticated menu at Girasol, Jacobson shows he’s evolved far, far beyond his reputation of burning broccolini on a plane. (We thought that a particular hamachi dish was worthy of a few Michelin stars.)

We spoke to Jacobson about how he’d gone from being “That Tall Guy On Top Chef” to gathering ramps in Rene Redzepi’s Noma, and plans for bringing his Scandinavian-influenced ethos to notoriously picky LA. Specifically: will he ever try to put crickets on the menu?

CJ Jacobson: Sorry to come in so early, it’s just cause we have service and a new crew and have only been open a week and half.

This space is gorgeous.

It’s really nice in the daytime when the sun’s coming in. I like it…we’ve been solid a last couple days and it’s harder to get cooks out to the Valley too. Because I lived on the west side for so long, I would have easier access to cooks. So we’re still missing like four staff. Some are doing overtime.

I’m note sure if it’s different out here, or the culture is still the same, but in New York, I was talking to Paul Gerard last week, and he was like “Yeah, most kids who graduate from culinary school think they’re going to get an executive chef position.”

I don’t think they think that anymore. I don’t know. Culinary school kids are a hit or miss, I think. We have a really good one who just started…I don’t think anyone thinks they are going to be an executive chef. Maybe they do, but I haven’t gotten any of those applicants. I think those days are a little older now. Because so many kids did go to culinary school after the whole TV thing, or whatever the hell it was, I think the word’s out that it’s not that easy.

And you’re part of the original generation of TV competition chefs.

Your season was the first…

…time you watched the whole thing through.

It was good. Our season was good.

How’d you get lured back on for Top Chef’s 10th season?

They asked me if I wanted to be on it. And I said, “Am I like your fifth choice? Because I know you’ve asked a bunch of other people.” And it was already up in Seattle, which would mean flying for me. But I used to be an athlete, so I love competition. And there is really no other way that you can do that — have your art, or career, and compete. It doesn’t match up.

Would I do it one more time? Probably not. I’m pretty much tired of it. It’s funny, because you’d think because we have a little extra [motivation] because you’ve gone before, but you don’t. Yeah, you can kinda expect something to happen but you’re still stuck in the same head fuck.

You definitely had some sort of advantage, because, one, you knew what was going to happen…

Anything could happen at anytime. Other people were really worried about the time because you have no free time. You don’t own it. They would just say, “Ok! We’re going to leave at two!” Then you’d know [you were leaving] — but you don’t know anything [else]. It’d drive people crazy.

How’d you feel about the Last Chance Kitchen and having to stop and restart the competition process?

For me it was fun. If I didn’t get kickoff, for whatever reason it was, I’d be pissed off that thing is happening because I’m still in it. But because I got kicked off, I still had a chance to get back in it. It was fun. I could do what I wanted to do. The fact that I got kicked off on a team challenge bummed me out.

I haven’t talked about Top Chef in so long; it’s so weird. It’s all been restaurant stuff.

I wanted talk to you about your time at Noma, because when I heard that you were there, it was a bit of a mind-twist. How’d that come across?

I was at a place where I didn’t think I was growing. I was at a gastropub and it was fine, but I knew I needed to learn more. I didn’t pay my dues that long. And that was bugging me. “Alright, I’m already executive chef, but I need to go learn a lot more.” I feel like I’m talented enough, or I was wondering if I was talented enough, and I wanted to see if I stacked up. And I love the food there. I wanted to really get inside his head. I just wanted a change. I wanted to try to get better and see where I was at. I wanted to form my idea about what California food was by seeing how he discovered what he considered Nordic food. He launched the whole thing there. Now Scandinavia has more Michelin stars than, like, anything else.

I got lucky, too. I got to work dinner service. I worked two sections. Then I got to be in the test kitchen, just with him, as research. So I was there for like, two and half, three months, just with him and head of research, there on the boat.

It’s really on a boat, right?

The Nordic Food Lab is. But we would deal with a lot of stuff we were cooking. They ferment a lot of their own stuff over there. We were using their form of a soy sauce which is made with barley and split peas. There was a lot of stuff we used on the boat, and I would volunteer to go help out and stuff.

Yeah. That’s exactly it. You go into this hemisphere of, alright, voted number one, best in the world, whatever that means. But it means it’s very, very good, whether it’s in the top five or whatever.

Did you get a chance to speak one-on-one with Rene?

Every day. I was the guy working with him and his head of research every single day. It was great. We would be going through stuff and he would be say, “Alright, the turnip. I want you to know everything about the turnip. So go research for a couple hours and then come back and we’ll talk about it.”

So was he a good teacher?

I don’t know if he was a teacher, per se. He would try to get my brain to work like he would think. Getting a mindset of the seasons are a narrative — that’s what we’re beholden to. If you ever watch him on Youtube, he really is that genuine.

And then he would send you off into the woods to find lichens.

It was right when spring was starting to happen, so it was ramps. So I would have to get ramps all day long for dishes we were making, which was awesome.

What kinds of lessons did you take from Noma to apply here?

I’d say, number one, is to try to be as local as possible. He takes a lot of effort in procuring his ingredients, and almost to a fault, because the food cost is so high there. But that’s really important. Not just looking at an ingredient and saying, “That’s just a carrot,” but “What can you do with a carrot?”  There they did this crazy dish, just really focusing on it. Even though our seasons are much different here, we are really at the whim of what’s growing and what’s beautiful.

I work with a lot herbs now. I love the anise-y flavored herbs now…shriveled tarragon flowers. I love softer herbs. I learned when you go out and you go foraging that often, you see how everything melds and works together.  You start [realizing] how this flavor tastes like this flavor, and you start to see a harmony. All of sudden, it makes more sense .

Let me know if I’m getting this completely wrong — [that view changes] once you see things in their natural environment, and not shipped to you in a box from a supplier?

Exactly, of course. And most of the stuff is like that. Herbs are eighty percent foraged and then they [at Noma] have a little greenhouse where they grow things in pots. When any order of seafood would come in, it would smell like the sea was crashing in the kitchen. The oysters just smelled like the ocean, because they had gotten them from a guy that they have a relationship with who goes to get these oysters off the Icelandic coast. You should follow some of these purveyors on Twitter. It’s pretty cool.

Do you think you’ll ever start experimenting with insects, too?

Maybe. I was there when we were getting a whole lot of foraged food, and eating grasshoppers everyday. And it takes like a week to get used to eating them.

Yeah, because they’re still a bug. In America, it wouldn’t work at all. Too many biases and too many phobias. There are people in our restaurant that won’t have a head on the fish. They’ll return it because it had a whole fried head on the fish.

That’s true…anything with a face.

Ha, yeah exactly. That’s when I get excited.