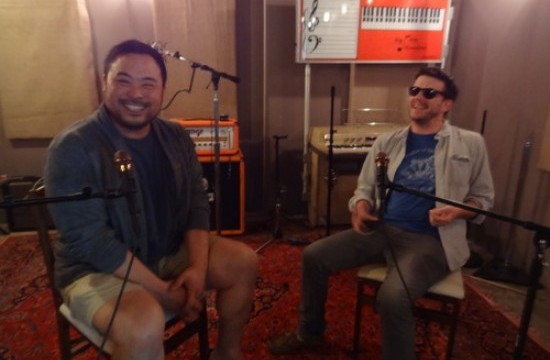 Once upon a time, David Chang and Peter Meehan were absolutely not friends, because 1) Peter Meehan was the Times food critic and 2) David Chang had no idea what he looked like, even though Meehan had eaten at Momofuku many, many times. Fast forward a few years, after Mark Bittman forcibly introduced the two, and a Hold Steady concert where Meehan supposedly grabbed Chang’s ass (“It was more of a gentle mounting,” Meehan joked), to yesterday’s podcast with Food Is The New Rock, and the two men are now close friends, co-authors for the Momofuku Cookbook, and partners in the food quarterly Lucky Peach.

“If I was never introduced to Peter, this relationship would never have happened,” Chang told host Zach Brooks, adding that he’d been “respecting the dance” between critic and chef.

The two dudes spend a good hour talking about everything from music to critics (because this is the podcast where chefs talk about music and musicians talk about food), and recapping is dumb for a too-interesting podcast that lasts an hour, so here are some interesting quotes: