Update: Eric Ripert Invites A Bunch Of Men To Tweet-Debate About Women In The Industry 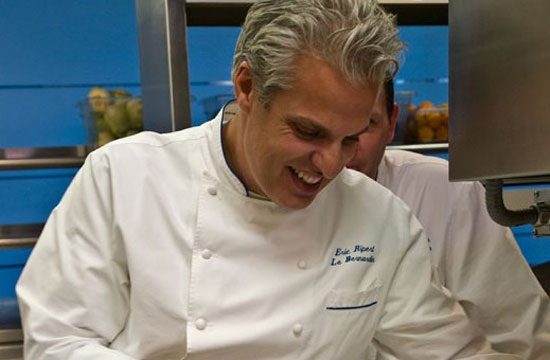 Last night, in the wake of Veuve Cliquot announcing their list of the 50 Best Female Chefs In The World, we were included in a Twitter debate in which Eric Ripert attempted to tackle the age-old/newly popular question: should the food industry single out the accomplishments of female chefs, because they are female? But while he pinged as many people as possible to jump into the debate — including us — we noticed something rather unsettling: he specifically asked for the opinions of his culinary peers, but did not invite a single female chef on Twitter to chime in:

To all chefs:Follow the thread of our debate on woman chefs; voice your opinion & Rt for bigger debate@absolutewrite @kevinhwiley @bourdain

Ok, let’s be clear about one thing: we don’t think that Eric Ripert intentionally snubbed female chefs, at all. (That’s not his style, yo.) In fact, he did try reaching out to them over Twitter, but didn’t tag them, as he did for his male colleagues:

@kevinhwiley @bourdain Ladies Chefs doyou have an opininion about our afternoon debate about being recognized as great chef or women chef? — Eric Ripert (@ericripert) April 4, 2013

@kevinhwiley @bourdain As you can observe they all working now…I feel guilty to have time to tweet;almost:) — Eric Ripert (@ericripert) April 3, 2013

To be honest, though, they probably would have chimed in had Ripert tagged them — as Eater’s recent interview roundup proves, they’ve got plenty to say on the matter of gender in the industry. Heck, Amanda Cohen and Naomi Pomeroy leapt into the debate, word-guns a-blazin’, and they weren’t even summoned:

@ericripert @bourdain As Chef’s, cooks whatever we call it, we have the same opportunities as men-if we make good foodThat should be it! — NaomiPomeroy (@NaomiPomeroy) April 4, 2013

We think that Ripert’s unintentional oversight is more of a symptom of the debate itself, not a sign that he’s the culinary Todd Akin. In fact, with some very prominent exceptions, we’re positive that most male chefs in the industry don’t view themselves as superior chefs because of their gender. But if you’re going to have a debate about female chefs — specifically, whether it’s necessary to acknowledge the gender of prominent female chefs known for their business acumen, culinary ability, compelling life stories, and other points of excellence — would it not be prudent to, y’know, ask for the opinions of specific talented female chefs as well?

No gains have ever been made in gender equity  withut open dialogue between the genders in question, and, frankly, it would be amazing to see a panel with both accomplished male AND female chefs talking about sexism, with each other. Heck, even over Twitter. To his eternal credit, Ripert started this dialogue by retweeting the experiences of female brigade chefs who responded with their own opinions and experiences:

@ericripert @kevinhwiley @bourdain: I had to work 10x harder in culinary school & professional kitchens for respect & to get on the line

@ericripert @kevinhwiley @bourdain If I was a chef, I would want to be known as a great one. It’s obvious that I’m a woman, why call it out?

But he can clearly go further.

Stay tuned for more coverage on the Lady Chefs debate, it’s a topic that’s particularly dear to us Braiser Ladies.

UPDATE: Oh look, our chef supreme Amanda Cohen of Dirt Candy (incidentally, she’s also the author of our guest column “Lady Chef Stampede”) sums it up with facts and figures right here. But don’t think you’ve heard the last of the debate. We’re crafting a fierce comeback of our own.