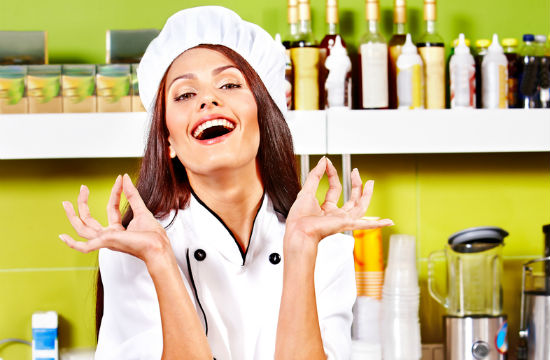 A small step forward in reinforcing the same stereotypes that women should be seen and not heard in the kitchen changing the conversation around women in food? That’s how Time Inc. is hoping to correct its wrongs from the male-only “Gods in Food” issue a while back.

Fortune and Food & Wine call their 25 recognized women “groundbreaking,” even if they’re “not on the the same scale as the big industry players, such as PepsiCo’s Indra Nooyi and Mondelez International’s Irene Rosenfeld.” And sure, these women work in varied fields, from world hunger to craft beer, government and think tanks to major corporations (like Starbucks and Whole Foods). The chefs and TV personalities named to the list are few and far between; the chefs recognized include Christina Tosi, Nancy Silverton, Giada de Laurentiis, and Rachael Ray (who’s not even recognized for her work in food, just as a “philanthropist” and TV host).

Not to say that every chef ever should have been named to such a list. Women are in fact making waves in the ways we eat. But there’s a major difference in these two articles that makes it impossible to call them equal in stature. By calling these women “innovative” and “entrepreneurial” instead of “gods,” “masters,” and “leaders” (straight from the Time debacble of an article), Fortune and Food & Wine still reinforce the idea that women aren’t to be considered on the same level as the men of food. (Note too, that unlike Fortune’s “Most Powerful” lists, this one uses the word “innovative” — why the change?) Language says everything. Men are straight-up motherf*cking bad asses, women are “creative.” And they have to be: as we pointed out back in July when the news of the article broke, women are turning to the lifestyle, business, and creative sides of food in large part because they’re motherf*cking burned out from working twice as hard to reach the same level of acknowledgement and success as men.

Sure, it’s a step that women who work tirelessly in behind-the-scenes jobs are being recognized for their work in food. We’ll give ’em that. But even so, it seems Time Inc. hopes to glaze over their mistakes instead of correcting an actual wrong: giving due credit and recognition to female chefs. For the David Changs, Rene Redzepis, and Alex Atelas of the world, there are the Stephanie Izards, Alice Waters, Barbara Lynchs, Amanda Cohens, and April Bloomfields, too. The New York Times got it. The James Beard Foundation got it. But until it becomes cool to stick a bunch of female chefs in a quirky environment wearing tocques, lady chefs will continue to be ignored by the food media, relegated to the corner while the “gods” reap up the accolades.

RELATED: Time Inc. Is Trying To Make Up For ‘Gods of Food’ By Running a 25 Most Powerful Women Crossover
Female Chefs Dominated the 2014 James Beard Awards