Fresh Off the Boat Recap, Episode 7

Fresh Off The Boat Recap, Episode 7: “Showdown At the Golden Saddle” 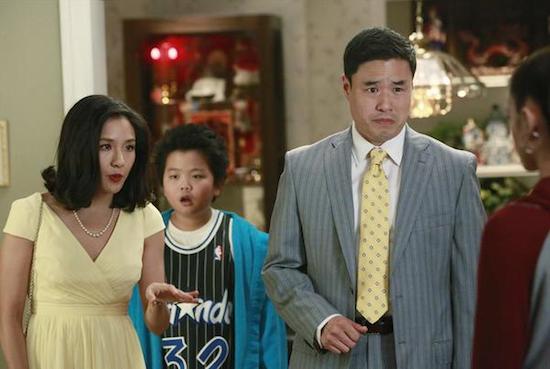 It’s all about the Dad (finally!)! He’s got a new scheme for the restaurant! Well, I guess we know where Eddie Huang gets it from. This time, it’s a billboard advertising the restaurant at the longest stoplight in town. This is where the homeless guy reminds people they are hungry. Initially things go well with the signage — so good, in fact, that Mom and Dad get invited to a charity dinner at the country club. Mom really wants to go because of the movie Caddyshack, her favorite movie set in a country club. “So much yelling, it’s so good.” I’m sure I tread on some cult classic ground when I say, no, no it wasn’t.

Eddie’s weekly problem is his unrequited crush on his next-door neighbor Nicole. That and trying to survive the bus ride home as a 6th grader — excuse me while I have some of my own nightmare flashbacks about those horrors — OK done, back to the show.

Shocker: Eddie comes up with a scheme to try and take care of both problems. A carpool! Mom agrees to this during a particularly charitable moment as she is picking out an outfit to wear to the country club: “Something that says I’m rich enough to be invited but not rich enough to ask for money.” Please someone tell me where I can get an outfit like that.

Like all Eddie’s (not really) best laid plans, Nicole likes riding the bus and he just ends up carpooling with some strange neighbor kid and his brothers, as this is their moment in the show to justify their under-utilized presence.

He gets a second chance to impress when his folks go to their country club charity dinner and Nicole comes over to babysit, a horror of infinite embarrassment to Eddie. He tries to make the best of it by putting the moves on her with some rap CD — ooh that’s a lady killer — and putting massive amounts hot sauce on his noodles. Even Helen Keller can see where this is going. Nicole gets a call from “some guy” and Eddie spends the rest of the evening in the bathroom pretending he’s taking a shower. I’m guessing he hasn’t learned the whole “just a light a candle” thing.

On the Dad front, the billboard is being repeatedly vandalized with a spray painting of a cow spurting milk all over Dad’s face, sort of like a milk necklace. Dad just hopes “nobdoy’s gonna believe [he] lets a cow do that to him, right?” I’ve seen the news, it’s Florida — anything goes.

When the billboard gets hit a second time, Dad fesses up to Mom he stole the idea for his Cattleman’s Ranch restaurant from a place called Golden Saddle. He didn’t want to pay the $50,000 franchise fee, and really who would? It’s not like it was a Starbucks or something.

Mom thinks it was a brilliant business move, just like picking the perfect billboard location. And he made the restaurant his own by “adding a salad bar, ‘wanted’ posters for people who bounce checks and the bears aren’t even the same color.” Wait, I don’t ever remember customers paying with a check at any of the restaurants I worked for in the 90’s. I mean, how are you gonna tip on that? Anyway, it was a moment of closeness between Mom and Dad when they realize it was the guy who owns the Golden Saddles that was vandalizing their signs (after all, Dad did steal his idea). Mom then has the bright idea to do the same to the Golden Saddle sign so they can stick it to the rich man “just like Caddyshack.” Next thing you know, everyone’s drawing steak knives in the parking lot! But hey, at least they wrapped up the storyline in a feel-good, destruction-of-property way!

The next day, Eddie is back on the bus and it seems maybe his scheme with the rap CD worked. I guess that is the music to woo a trashy girl’s heart. Nicole actually says hi to him on the bus. It might be all well and good but Eddie looks 12 and Nicole looks 17 and it all feels just a bit skeezy, though, whenever young boys are involved, it usually is.

I have to say, while this show isn’t quite growing on me yet, this episode did seem more compact and put together than previous ones. The storylines were succinct and as a whole it just felt crisper. I guess that is what happens when you focus more on the relationship between the parents than a kid who is hard to like.