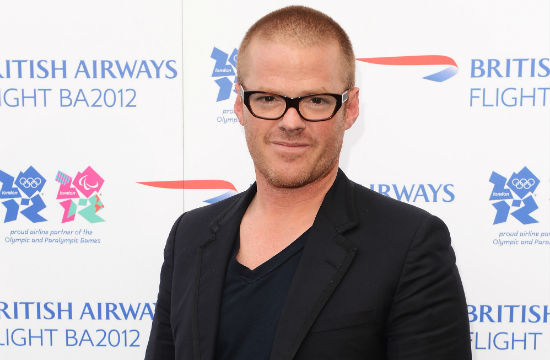 First he constructed a 1000-pound, 4-meter tall ice cream cone for his show on the Fourth of July (or, as it’s known in England, July 4th). Then, he set a 2.5 meter tall Christmas pudding, engulfed in a vortex of Christmas colored flames. Now, Heston Blumenthal has moved onto giant biscuits meant to be dunked in giant cups of tea, and giant breakfast items that taste like other (giant) breakfast items.

The first episode of the series premieres next week, and will focus on a commuter train theme, in which edible newspapers are served along with giant, trick breakfasts. The meal was described by one commuter thusly:

“It was all very Willy Wonka and nothing Heston did was ever quite what it seemed — that was the whole game. We had tomatoes that were actually made of sausage, tomato that looked like bacon and a giant egg made of all sorts of things. Instead of toast soldiers to dip in, we had cake and they had people dressed as real soldiers marching through the carriageway. It was very different. The first thing Heston served us was a newspaper, which was completely edible and had lots of different flavours, including a pull-out advert that was made of marzipan.”

How very quaint those Brits are. But seriously, we worry about Heston’s mad scientist inclinations. This obsession with giant foods can’t be healthy. Or useful. Or efficiently consumed.

[This Is Leicestershire h/t Eater]