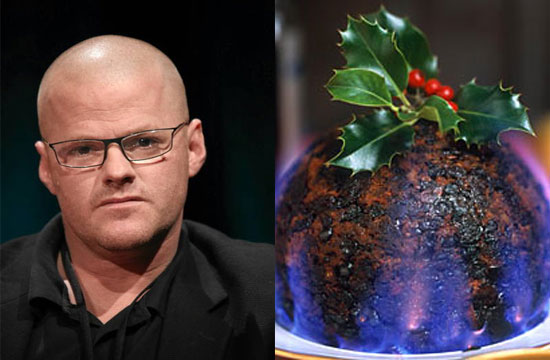 For his upcoming Christmas television special celebrating England’s “food nostalgia,” Heston Blumenthal has decided to make some Christmas puddings and give them to England’s service men and women serving over the holidays. But why make a traditional Christmas pudding like a normal, non-molecular-gastronomy chef, when one could instead make the entire thing in the biggest KitchenAid mixer known to man — a cement truck?

In order to make the 2.5 meter tall pudding (in American, that’s a little over eight feet tall), Blumenthal bought a brand-new cement truck and lined the interior with teflon to make it safe for cooking, “although I’m not sure what health and safety would have to say about it,” shrugged the truck driver to the Essex Chronicle. Health inspectors don’t matter to Heston, truck driver.

Of course, a figgy pudding needs dried fruits — 600 kilograms of currants, dark raisins, and sultanas (the fancy word for “raisins made from green grapes”), to be exact. Dear god. That is more than a half ton of shriveled fruits.

The best bit of narrative color from this entire article: how one local woman had worn a pair of Christian Louboutins to the cement truck to “celebrate the occasion,” while Heston, noticing that a blue plastic bag had fallen into the cement mixer with the fruits, took off his shoes and jacket to dive into a cement mixer full of raisins and dig it out.

And after all that’s done, why not use chemicals to make the eight-foot-tall pudding go ablaze in Christmas colors, and then spin it to “create a vortex of the colored flames”? Because Heston Blumenthal, that’s why.

Oh stop that. Stop that. This is too silly.