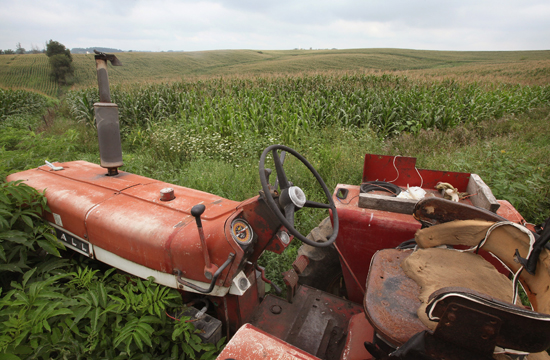 Yesterday, the House Committee on Agriculture released a first draft of the Farm Bill, a bill renewed every five years encompassing all food policy in the US. But though the 557-page bill, according to the Congressional Budget Office, cuts $35.1 billion from the federal agriculture budget, it does so by cutting food stamp programs while increasing subsidies for large agricultural producers.

A majority of the House’s proposed savings from the Farm Bill come from proposed restrictions and retooled income and assets qualifications in the Supplemental Nutrition Assistance Program (SNAP), cutting $16 billion from the federal budget over the next five years — nearly triple the amount proposed by the Senate’s version of the Farm Bill last month. With these tests, hundreds of thousands of families currently receiving SNAP benefits could be disqualified.

But although the Senate version of the Farm Bill called for cuts to certain agricultural subsidy programs, the House draft calls for an 40% increase in crop prices that would trigger automatic government assistance to production agriculture farmers, a provision friendly to Southern growers in particular. Rice and peanut growers in the South command higher prices than wheat and corn producers in the Midwest, and POLITICO suggested that Committee Chairman Frank Lucas, a Republican from Oklahoma, threw $24.5 billion into farm subsidies as a concession to Southern growers.

In addition, the differences between the House and Senate versions of the Farm Bill are likely due to the makeup of the GOP House members: Lucas, balancing the interests of Big Ag and the limited-government Tea Party conservatives, “must contend with tepid support from the top GOP brass and a fractious class of Republican freshmen who have never been through a farm bill debate before.

Draft coauthor Collin Peterson (D-MN) was not happy about the proposed cuts made to the bill, but Congress must pass the Farm Bill before the beginning of the three-month August recess, since the current Farm Act expires on September 30th. “Congress needs to complete work on the 2012 Farm Bill before the current bill expires, otherwise we jeopardize one of the economic bright spots of our nation’s fragile economy,” said Peterson in a statement. “While I would have found other ways to accomplish the bill’s nutrition savings, the bottom line is that, working together, we need to keep this farm bill moving forward.”

The House Agriculture Committee will debate and vote on the bill next Wednesday, and should it pass from the chamber, will be put to the House Floor for a vote. Afterwards, their bill needs to be reconciled with the Senate’s version of the Farm Bill, and then they have to bring it to the President to sign it into law. Given that the Senate and House versions of the Farm Bill are so vastly different, Reuters noted that “analysts see low odds for enactment of a new law on time.” Did we expect any less from our beloved Congress?