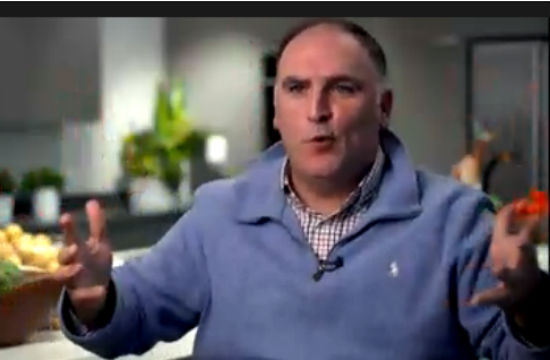 We got so caught up in the friendship between Jon Favreau and Roy Choi that we completely missed another celebrity chef teaming up with Hollywood: Jose Andres and the TV show Hannibal. And it turns out that Andres is really, really good at getting into the mind of a cannibal.

“Even if, ultimately, Hannibal is cooking human flesh, a lot of people say that when they see the food sequences, they wish they were at the table,” says Jose Andres, one of many L.A. culinary stars satisfying Hollywood’s need for onscreen authenticity …

“Hannibal loves his food; he doesn’t eat the way a cannibal eats. This I understand,” says Jose Andres, chef and owner of The Bazaar at the SLS Beverly Hills and Miami, along with restaurants Jaleo and China Poblano in Las Vegas, as well as the Minibar empire in Washington, D.C. “I have a lot of ideas of how Hannibal would be inspired to cook something. The way he cooks is clean. He is stylish, the way he sautes.”

Whoa. A whole new perspective on Andres, that’s for sure. Still, everyone realizes that in order to portray food on the silver (and big) screen, the producers have to win over the foodies:

“Food has become a subject of great interest in America and around the world,” says Jeff Kleeman, who is producing the film El Bulli, a fictional biopic of renowned Spanish chef Ferran Adria. “Whether it’s in Spain or in Peru or Tokyo, there’s a huge fascination with food, and there’s an incredibly knowledgeable audience now. The bar is set much higher for a food movie today than it ever was.”