Julia Child Actually Wrong about Washing Raw Chicken; Everything You Believed Is a Lie 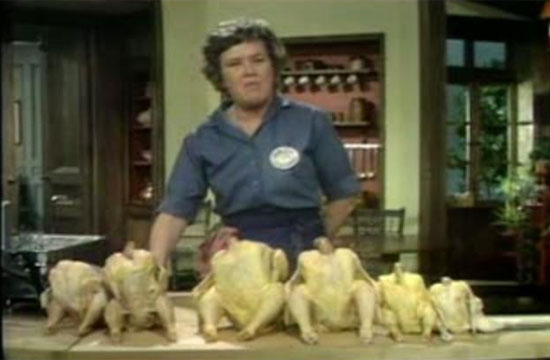 Ever since this fateful morning, when NPR published an article debunking one of Julia Child’s biggest adages about washing chickens, we don’t know what to believe anymore.

Child used to tell her viewers to wash their raw poultry before cooking with it — “I just think it’s a safer thing to do,” she would instruct her audience on The French Chef — and no one really thought to question her, because it’s just not something that anyone in their right mind would do. Anyone, that is, but rabble-rousing germa-phobe and Drexel University food safety researcher Jennifer Quinlan.

Though she knows that she will forever be branded as a heretic for questioning Child’s wisdom (“I don’t want to take on that,” she told NPR), Quinlan says that washing the bird will actually spread harmful bacteria:

That’s because washing increases the chances that you’ll spread the foodborne pathogens that are almost certainly on your bird all over the rest of your kitchen too, food safety experts say. We’re talking nasty stuff like salmonella and Campylobacter, which together are estimated to cause nearly 1.9 million cases of foodborne illness in the U.S. each year.

To assure all the hyperventilating chicken-eaters out there, Julia’s close friend and brother from a French mother Jacques Pepin says that he never washes his chickens before roasting them, either. “The heat kills all the germs,” he once told Julia on an episode of their TV show, adding that “if bacteria could survive that oven, it deserves to kill me.” Also, not washing a bird results in such delights as a crisper skin, a shorter prep time, and not dying of salmonella.

Shh. It’s all right. Just accept this new paradigm, and use that extra five minutes for roasting some fingerling potatoes.