Kitchen Confidential, Episode 3: What Doesn’t Kill You, Makes You A Bad Chef

Kitchen Confidential, Episode 3: What Doesn’t Kill You, Makes You A Bad Chef 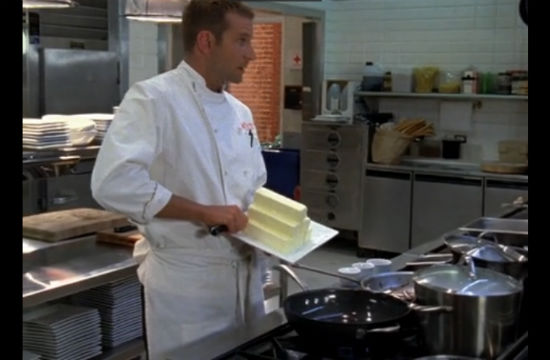 Fair warning: This week’s recap of Kitchen Confidential, the TV series, has zero gratuitous sex. Well, there’s a moment with Steven (Owain Yeoman) and a dissatisfied married chick in the bathroom, but we suffered a grueling 22 minutes without Jack Bourdain (Bradley Cooper) sex to bring you this recap. Actually, Jack kind of plays the wet rag this week, standing by his sobriety (snooore), and finding himself plagued with a conscience. Well, we had to expect a series slump at some point.

We open with Nolita majorly in the weeds. Jack gives his sous chef Steven crap, Steven gives his pastry chef Seth (Nicholas Brendon) crap, Seth gives line cook Jim (John Francis Daley) crap, Jim tries to dish it back, but, whoa there, Jim. No crap-backs. Seth explains to the rookie that seniority rules in the kitchen, and thus, he can only take out his frustrations on the people working below him — in Jim’s case, no one. Although, he does consider smacking around the waitresses before Seth snarks, “Yeah! That’ll end well!”

Among the patrons in Jack’s packed restaurant is an old friend and his aforementioned bored wife who, shocker, is trying to rekindle her affair with Jack. But no time to flash back to a sex scene now, because, what’s that? The pesky hot dog cart outside is selling dirty water dogs to Nolita’s hungry, waiting patrons. Curse that tiny man!

Back inside, Mimi (Bonnie Somerville) storms into the kitchen (how many times does Jack have to banish her before she goes away?) to inform the staff that someone wants to order off the menu. Not a dishwasher emerges from this announcement unscathed. Jack is about to launch into a tirade against the pompous asshole who dares question his menu, but then realizes it must be…

…Chef Gerard. His mentor from culinary school (played by John Larroquette!), rumored to have once killed a man for using too much paprika. Who else? Now we have time for a flashback. Unfortunately, it’s not the sexy kind. It’s the kind where we see a young Jack in culinary school being told he’s a useless sack of — wait, actually, it is kind of sexy.

After asserting that he is not a trained poodle and doesn’t have to impress anyone anymore, Jack sends out a whole salmon to his former mentor, cooked to the last specification. He’s visibly jealous of Steven, who is now consuming vodka from a measuring cup.

After searching high and low, Jim finally finds someone beneath him in brigade de cuisine to play locker room ass-smack with. Unfortunately, the rough-and-tumble Hispanic dishwashers are a poor choice upon whom to focus that rambunctiousness. Jim finds himself Ramon’s bitch in less time than it takes to rinse a spoon.

As it turns out, Jack’s scary mentor loves his food! He loves it so much that he requests a standing reservation at Nolita every night. Why, you ask? Because he’s celebrating! He’s just received his third (and final) quadruple bypass, and his doctors have warned him that he must change his eating habits or surely die. So, he wants Jack’s to be the food that kills him. Of course, the only shocking moment Jack takes away from this conversation is being told he’s Chef Gerard’s greatest student. Ladies and gentlemen, narcissism at its DAMMIT — finest.

In that classic kitchen depravity we’ve come to know so well from Kitchen Confidential, Seth and Co. start a pool for what time and which course will take out the gorging Chef Gerard. An enormous lamp chop portion the next night fails to do the trick. Ah, well. Better luck next service.

Jack launches into a montage voiceover about how annoying chefs find people who can’t appreciate their food the way it was meant to be prepared, with intended butter, fat, and carb content. So, when it comes to pleasing his harshest critic with all the unbridled indulgences his imagination can muster, Jack Bourdain feels good about life.

Tiny hot dog man comes into Nolita to use the restroom, but hostess Tanya (Jamie King) swiftly boots him out. Sooo, he just relieves himself in one of the bushes outside windows where patrons are dining. Classy. Back in the kitch, Ramon has officially nicknamed Jim “Chorizo” (which, by the way, is the cutest nickname for John Francis Daley EVER), and set him to such menial tasks as tying his shoes when the laces come undone. Oh, Rookie. Will you ever manage to evade extreme degradation?

When Jack starts to feel a little guilty about euthanizing his mentor with 6 sticks of butter, Steven assures him that they, as chefs, aren’t responsible for a dessert-gorging woman’s subsequent thigh jiggle, a Scotch-swilling patron’s hangover, or a John who has taken his prostitute to Nolita for the evening potentially contracting chlamydia. The role of the chef is simply to give the patrons what they want. So, presumably Steven weighs in on the Aguritz/Keller side of the sustainability debate.

Jack’s conscience forces him to skimp on the fat for Chef Gerard’s next meal, and, of course, Gerard sends it back. He calls his former student a disappointment for choking like he always did in school, but Jack promises to kill him dead. Which, like, really, Anthony? When was this a dilemma you ever found yourself in?

Dishwasher Ramon’s next demand is to be set up with Tanya. Jim refuses on account of the fact that she’s a nice, sweet girl, so Ramon throws whiskey on his fire and singes off his eyebrows. That was mature. Cut to Jim telling Tanya what a great guy Ramon is while she fills in his bald brows with an eye pencil. The resulting makeover is so eye-offending that even Jack can’t stand to look at him, so Steven and Seth get scolded for allowing Jim to become a dishwasher’s bitch. Seth confronts Ramon and arranges to buy Jim from him. Final asking price? A hot dog.

Meanwhile, Jack refuses to help Gerard self-destruct, and, instead, launches into his own tale of hitting rock bottom and then finding sobriety. Natch, Gerard challenges him to taste some of his wine — “the finest Bordeaux the world has seen in a century.” The two debate the puritanical devotion to abstinence versus living a life of excess until Gerard exits, shaking his head.

Just as Jack takes a swig of wine in defeat, his mentor crashes against the window outside, clutching his heart, with hot dog in hand. Jack quickly spits out his mouthful of vino. Um, is that how it works?

Moral of the story: you can’t save others, you can only save yourself. Fine, but we really think Jack ought to have given up his one year chip for that spit-take.