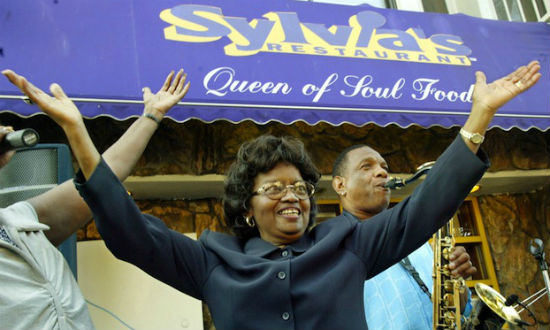 I got an email a few weeks ago from a lady chef who was really in despair. After working in restaurants for 25 years she was sick and tired of watching less experienced men get promoted over her. She had searched and searched for investors, never finding any willing to back her, while she saw her male peers get funding, open restaurants that crashed and burned, and then find other investors who were still willing to loan money. It was a really depressing email, and it ended with her saying that she was packing it in. 25 years was enough and she was starting to search for another job, this time outside the food industry.

Her story made me think of Sylvia Woods.

Sylvia Woods was the Queen of Soul Food. One day before the 50th anniversary of her landmark Harlem restaurant, Syvlia’s, she passed away at 86 years old. But before she went, she left behind a legacy that will last.

Born in 1926 in Hemingway, SC, Sylvia never set foot in a restaurant until her first day of work as a waitress in New York City in 1954. In 1962, her mother mortgaged the family farm back in South Carolina and with that money Sylvia opened Sylvia’s. Since then, it has appeared in movies, become a social center of Harlem, received rave reviews, and launched both a catering company and a line of food.

Back when I was just out of college and eating out of cans a lot, Sylvia’s was a revelation to me. I was living up in Spanish Harlem and found her canned beans and hot sauce on the supermarket shelves at the Pathmark on 125th Street. They looked different, so I gave them a try and I will put in writing, right here and now, that if you’re going to eat vegetables from a can, make them Sylvia’s. They just taste better. And I love her hot sauce.

In an interview with the New York Times in 1994, when she was 68 years old, she was asked if she was planning to retire. “I keep pressing on,” she said. “I can’t give up. I’ve been struggling too long to stop now.”

Sylvia was a mother, a wife, a friend to many people, and most importantly, when it was hard to make a career for a woman, and especially for a black woman, she was a chef. And not just a chef, but a chef who built a soul food empire. And that’s what every single one of us working in a kitchen has to remember, every single day. Whether our careers are skyrocketing, or bombing, whether we’re moving up or falling down, there’s one thing we owe each other. Even if you work in the world’s worst kitchen in the world’s most sexist restaurant, one day there’s going to be a girl who starts working there and you can make it just a little bit easier for her. And one day, when she’s in your position, she can turn around and make things just a little bit easier for the next girl who comes along.

It’s not easy and it’s not always fun. But we can do it. Because Sylvia never quit.