Last Call How Do Dinosaurs Taste

Last Call: Which Dinosaurs Would Chris Cosentino Be Cooking, If Dinosaurs Still Existed? 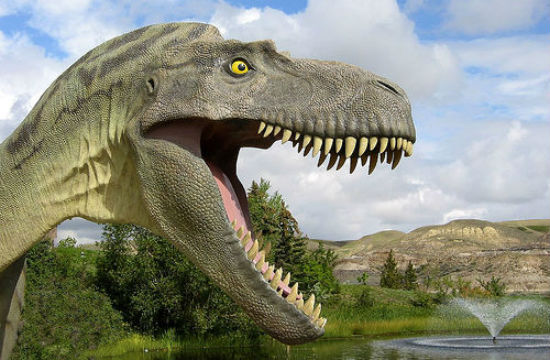 Popular Science: If dinosaurs still roamed the earth, which ones would be doomed to the slaughter at a dino-centric restaurant probably run by Chris Cosentino? The herbivorous ones. Carnivores were probably gamey-tasting from all the meat they ate, especially T-rexes, which often consumed rotten meat. Too bad Brontosauruses turned out not to exist. Those would have been delicious.

Variety: Food Network got a new logo to celebrate its 20th anniversary year. Changes include a lowercase F, slanty font, and a gradient. Ooh, ahh, etc.

NYDN: What’s that thing Pete Wells said about the blue drink at Guy’s American Kitchen and Bar that glowed like nuclear waste and tasted like some combination of radiator fluid and formaldehyde? Maybe Guy Fieri’s mixologist is just using some of that new cachaca from Brazil aged with gamma radiation. Oh, it’s a real thing, alright. Excuse us while we never drink a caipirinha again.

Huffington Post: Remember that Seattle coffee shop that Patrick Dempsey is trying to save because art imitates life and he’s the McDreamiest? Starbucks elbowed its way into the auction and is now trying to buy out Tully’s Coffee themselves. BACK UP OFF DEMPSEY’S GAME, BRO. This man’s a doctor.