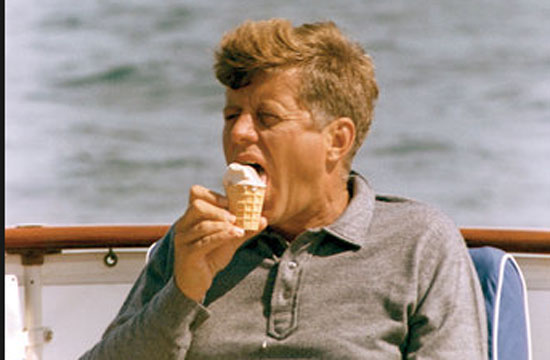 The New York Times: This is not Buzzfeed. This is The New York Times compiling a slideshow of ten Presidents of the United States (and one guy who might become President), stuffing food into their faces. (Well, really, it’s nine Presidents eating, and one Richard Nixon looking like he has a weird tumor in his right cheek.)

Slate: J. Bryan Lowdner breathes a sigh of relief that Martha Stewart’s new PBS cooking show, reminiscent of Julia Child’s revolutionary show, actually wants to teach you how to cook instead of making a crazy, elaborate presentation: “In Stewart’s otherwise baroque (and financially floundering) domestic empire, which can certainly partake in its own WASP-ish kind of aspiration, Cooking School’s pared-down, old-school approach represents a new direction, and a welcome one at that.” (Plus, we’ve all been hardboiling our eggs wrong. Oops.)

HuffPost: Bloomberg nemesis Coca-Cola recently announced a partnership with a French company to begin designing and marketing “beauty drinks.” It apparently has all the minerals and vitamins needed to “help strengthen hair and nails, embellish skin, lose weight and improve vitality.” We thought the French called “beauty drinks” “wine.”

The Daily Mail: That Marco Pierre White fellow, ‘e got a roight moind comin’ round  an’ openin’ up ‘is nosh for the Queen, ‘e did. It makes sense ‘e closed the The Rainbow Inn in rural Cooksbridge after ‘e tried turning the pub into a hoity-toity place. “I could not pronounce half the things on Marco’s menu let alone eat them,” said old man Alf Trumbull. Yer a good man, Alfie. Yer a good Englishman.

The Daily Meal: Want to eat like a Thai person? Here’s a video of a white man who can teach you how! (We don’t mind that you’re white, Andy Ricker. It’s just funny.)