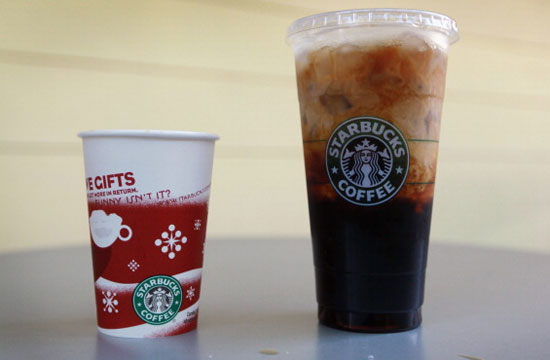 Behold, the tyranny of Mayor Michael Bloomberg! He taxeth the sodas and slurpees! He regulates beverage sizes! He eliminateth trans fats! And now, as the 12th of March approaches and ye olde large beverage ban takes effect, the good citizens of New York have discovered a new inconvenience to their personal liberty: they will no longer be able to purchase coffee with sugar already added.

Witness the despair at Starbucks and Dunkin’ Donuts. As the New York Times learned, coffees over 16 oz can have no more than “three to five” sugar packets in them. Instead, should they desire to have sweeter coffee, customers must make haste over to the condiment stand, and add their own sugar. (Exceptions include beverages that are more than 50% milk, for that constitutes a healthful tonic.)

Concerned citizens will surely (mis)interpret the rules in unique ways, for example this sad tale from a Dunkin’ Donuts:

Dunkin’ has tried to reduce the inevitable confusion by handing out small fliers at cash registers. Titled “New N.Y.C. Regulations — What They Mean for You,” the fliers explain that while lattes and small coffees are protected, drinks like hot chocolate, frozen Coolattas and larger coffees will be downsized or desugared. Workers at the chain have also been trained to answer questions about the ban and gently inform regulars that their favorite drinks will be unavailable by Tuesday.

Shock and dismay are not uncommon reactions, said Jared Feldman, a Bedford-Stuyvesant resident who has witnessed many similar exchanges over the past week at his local Dunkin’. “They go through all the stages of grief,” Mr. Feldman said.

Naturally, the citizens of New York are furious at this injustice:

“The whole point of buying coffee is just you get it and go,” said Yolanda Rivera, 30, who was drinking a medium iced (and sugared) coffee in a Dunkin’ Donuts near Times Square on Wednesday. “It’s just going to be annoying.”

Ah, New York City–the land of opportunities to turn minor daily annoyances into reasons to seek grief counseling. How long until we have to hear hipsters bragging that they drank black coffee, like, before it was a thing? In other news, Mayor Bloomberg would like to remind you to brush your teeth before bed.