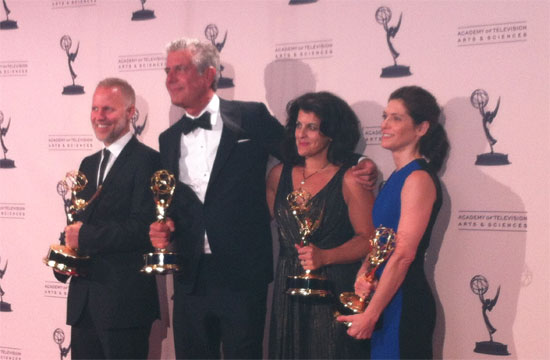 Last night in Los Angeles, Zero Point Zero Productions and Anthony Bourdain made their corporate overlords at CNN proud as they won Primetime Creative Arts Emmys in two categories: Outstanding Cinematography For Nonfiction Programming for their first episode in Myanmar, and Outstanding Informational Series or Special overall, tying with Inside the Actor’s Studio. Congratulations, guys! (PS: this proves that the program has as much gravitas as James Lipton, which is sincerely and truly a master feat.)

Were we joking about the corporate overlords thing? Not at all: according to a press release from CNN, it’s the first time that the cable network has won a primetime Emmy award. (The Bourdain/Zero Point Zero team previously won a cinematography Emmy in 2011, and were nominated in 2006 for their famous Beirut episode.) But it’s no surprise that they were recognized: ever since its premiere in April, Parts Unknown has been a ratings bonanza for the normally staid network, as well as a critical darling and a lightning rod for people who can’t stand swears on their news programs. (At this moment, we’re sitting back and watching them complain about the controversial Jerusalem episode.)

Sadly, Bourdain lost his nomination for Best Host (of The Taste) to Heidi Klum and Tim Gunn for Project Runway. There’s always next year, Bourdain, and think of it this way: Betty White won’t eat your votes! (It’s so weird to think of Betty White as his Ralph Nader.)