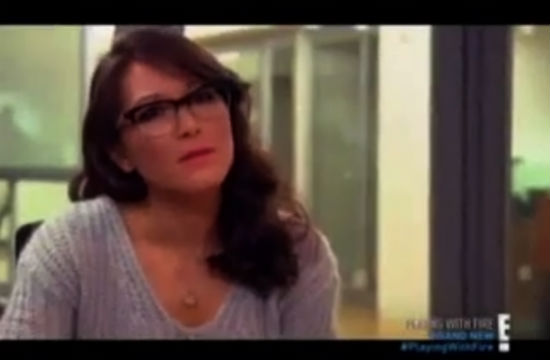 Sitting through Candice Kumai’s segments of Playing With Fire this weekend might be among the most painful things we’ve ever done. The episode featured her foray into “serious food journalism” as she took a pitch meeting with Men’s Health (for whom she blogs) to write a feature for their print magazine, AKA The Big Leagues.

ProTips: When pitching a men’s magazine, do not use the phrase “OMFG” in your presentation. When blogging for a men’s magazine’s website (a job we’re unclear on how you secured), do not use emoticons and/or the phrase “xoxo” in your pieces. When pitching a legitimate publication with the intention of using it as “your big break” into journalism: maybe like, y’know, prepare things. Check out the pitch meeting that would have made Don Draper light himself on fire below.

Then came her uncomfortably flirtatious interview with Marco Canora, which probably would have been gutsy and charming had her stick-in-the-mud editor not been hovering over her shoulder, but her stick-in-the-mud editor was hovering over her shoulder. Imagine Miss Trunchbull supervising you on a date that was actually supposed to be a work meeting. That’s what this was like.

Did Candice get a scolding for being overly sexual? Of course she did. Right before she interviewed one of the pancy-pantsiest chefs in the country: Jean-Georges Vongerichten.

Granted, Candice got her shit together by the final meeting with the magazine, presenting each of her editors with iPads outlining her feature, and everything looked very polished and professional. Which made it all the more awkward when they not-so-subtly suggested that she’d come off better in a video series than on the page. Journalism Industry Translation, Candice: you can’t really write, but you’re smokin’ hot, so maybe if we slap your face on the internet talking about foods, dudes will give a shit. Candice takes it in stride, though, understanding that it’s tricky to manage an individual such as herself who has so many talents that it’s difficult to place her in the right role. Yup. That’s exactly what’s going on here.