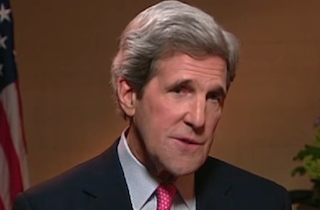 Among the reasons some foreign students are choosing not to study in the United States, Secretary of State John Kerry said, is because they are “scared” of the country’s gun violence. Speaking about the discussions he’s had on the topic, Kerry told CNN that they don’t feel safe.

CNN foreign affairs correspondent Jill Dougherty sat down with Kerry in Tokyo and asked him whether he’s heard any “concern” about the gun control debate in the U.S. Among the response he’s received, Kerry said, some emphasis has been on how safe Japan is with their tough restrictions on guns.

“We had an interesting discussion about why fewer students are coming to, particularly from Japan, to study in the United States, and one of the responses I got from our officials from conversations with parents here is that they’re actually scared,” he informed. “They think they’re not safe in the United States and so they don’t come.”

They’re used to a country “where people are not running around with guns.”

Unlike the United States, the right to private gun ownership in Japan is not guaranteed in law. Individuals wishing to possess any firearm must obtain a license and demonstrate a reason for owning the gun.

CNN noted that the number of students Japan sent in 2011 to study in the U.S. was down 14 percent from the previous year.