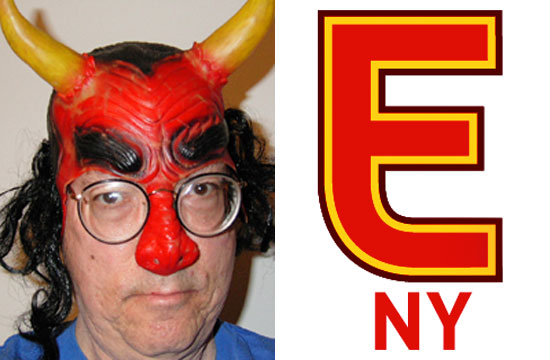 Eater stood by its ‘no restaurant review’ policy when announcing that they snatched up prolific critic Robert Sietsema after his brutal Village Voice ouster. Now, the site must’ve seen that the man has a certain skill set that really shouldn’t be stifled. Today, they debuted “Sietsema’s Catalog of Culinary Crimes” which is basically a list of mini restaurant reviews, or review snippets only about things restaurants really suck at.

Here’s how the site describes the column:

“While they may seem to be the exclusive province of bad restaurants, crimes against gastronomy can appear anywhere, even in otherwise good establishments. All it takes is a moment of wavering or lapsed taste and – POW! – a severe infraction is committed, awful enough that it lands the restaurant in this hapless collection.”

The list of severe infractions — “Putting fresh peas, raw sunflower seeds, and extraneous green matter on the top of your guacamole is an affront to one of the world’s most perfect dishes,” for example — sound just like pull quotes from classic Sietsema reviews, which comes off like a sneaky way to get him back in the saddle without openly admitting to doing that thing Eater said it flat out doesn’t do (emphasis theirs):

“Eater has never had a food critic, so Sietsema’s pieces will not be reviews. Instead, he’ll write microneighborhood dining guides from the outer reaches of every borough and file on crucial overlooked discoveries as he continues his explorations of New York’s restaurant universe.”

We guess one could argue that things that are terrible at various Manhattan restaurants are “crucial overlooked discoveries.” Either way, the website kept Sietsema out of reviewing for nearly six weeks, a pretty solid run considering we’d just stare googly-eyed in his face and ask him to say things about restaurants non-stop if he ever stepped foot into our offices.

Here are some more choice quotes from the non-review Robert Sietsema Burn Book that we’re maybe just a little jealous of:

On so not the next cronut, at Breads Bakery:

“While the creators of this misbegotten pastry might have thought they had another Cronut on their hands, this baked good filled with the Swiss breakfast food called muesli and paved with seeds that get stuck in your teeth tastes like something you’d hang from a tree to feed birds.”

“Rivers Cuomo may have sung, “Cheese tastes so good/On a burnt piece of lamb,” (in Weezer’s “Dope Nose”), but really, it doesn’t.”

And your basic ‘I don’t want to eat any more of this’ review of Roll and Go’s Teriyaki pizza:

“The gluey brown sauce comes from a bottle, the meat component is unidentifiable, and the crust has seen better days. The only thing worse than Roll and Go’s teriyaki slice would be an entire teriyaki pie.”