Waiting In Line For Cronuts, As Told By A 10-Year-Old Boy 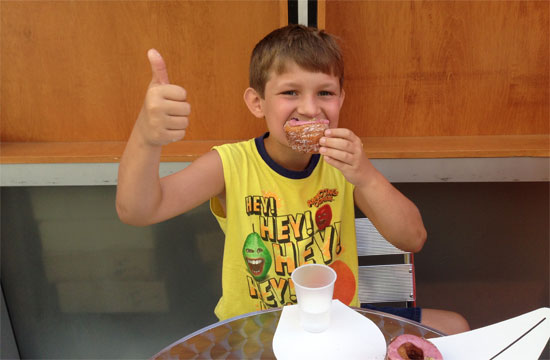 Never one to waste a perfectly good red-eye flight, I decided to skip going home from the airport at 6:00 this morning and went straight to Dominique Ansel’s bakery in Manhattan, to finally get my hands on a legendary cronut. As I waited in the two-hour line, I hung out with a family on vacation from Orlando, Florida: Grandma, her friend Smiley, and Daniel, a 10-year-old boy who got to the front of the cronut line at an insanely early hour.

This is an oral history of our time spent waiting for cronuts, seen through the eyes of a very sophisticated young boy obsessed with Minecraft, Annoying Orange, and entrepreneurship.

Grandma: Are you serious?

Daniel: I mean today, we coulda made a little of dis…[makes money sign with hands]. And we could have bought twenty cronuts each.

Daniel: Have you ever heard of what do you call, creepypastas? There’s a bunch they put on the internet stores.

Smiley: [He’s talking] about videogames. They got some freaky characters that can kill.

[I shake my head.] I’ve heard of Slenderman.

Daniel: Oh yeah! The person who who chases you into the dang woods and tries to hunt you down and you gotta find the dumb pages…whenever he gets close, he goes [shrieks] and you go “OH MY GOD” and you gotta run for your dang life. What story do you wanna hear? There’s a whole lotta stories about Slenderman.

[He wanders around and spies a scruffy-looking man at the front of the line, probably the Cronut Scalper.]

You can’t order a dozen or anything, but if you could, the first person in line could just order two hundred.

[Ahead of us, three interns from a prominent comedy show get bagels delivered to them. Though they’ve all been up since 4:30, they don’t get to eat any of the cronuts, since the show needs exactly six cronuts as props.]

That’s true. You can order cronuts for big events but if you do you have to order 50 at time.

You won’t be able to get them for another like, three months.

Daniel: Well I probably won’t be here for three months so we can get them again. Hehehehe!

Or you could just wait in line like the rest of us.

Daniel: Getting two Cronuts at a time. Wait, you know a person? He knew of a way of getting first in line, promise.

Daniel: Well what he did was — he didn’t sleep here, cause that’d be the best way of doing it.

That’d be a little insane.

Daniel:  No, no. [points to bench] Right on the bench you can sleep and then, like, you wake up at 6 o’clock and go right in the line.

Has someone actually done that?

Daniel: I have no clue. We only got here at like six-something. I thought it was gonna open at 7:00 o’clock.

Daniel: If you got here at 8:00, you’d have to go aaaaaalll the way back there.

And you don’t get one at eight.

Daniel: You only get one at 4:00 or 5:00. I’ve seen some people wait in line for days. What happens is one person actually waits in line for like 24 hours, drinking his coffee, trying to stay awake, not trying to fall asleep and then when the door opens, it’s like, “Hallelujah!” You know how many mothers are here at night?

You get two Cronuts and then you sell one when they’re all sold out.

You know, they want a cronut. [points to the interns] If you wanna sell your extra one.

Daniel: Ooooh! [He runs up to the female intern.] How much do want for it?

Lady Intern: I’m not giving you 100 bills for your cronut.

At the same time, these guys won’t be able to eat their cronuts because they have to give them to a late night comedian.

Intern: They’re putting them on baseball bats and then playing with them.

Daniel: How much would you give for a cronut?

Daniel:  They taste like blackberry. I’m staaaaaaaaarving. I wanna eat a dang cronut. I’m gonna get two cronuts and I’m gonna sell one for ten dollars.

Smiley: You should get more than that.

Intern: Take a couple zeros off that.

Daniel: OK, who wants a cronut?

Grandma: He’s just really into selling it now. He won’t get off this.

Smiley: Oh yeah, ‘cause he’s trying to get a video game out [of] it.

In econ, this is called scarcity.

Daniel: In “Ecomm”, cronuts are delicious! So anyone would do it to buy it.

Daniel: In this country, selling it isn’t illegal. Well it kinda is.

[We notice that more people have cut the line in front of us.]

Intern #2: That guy with the Fordham shirt, he wasn’t here before.

Maybe he cut the line.

Daniel: Someone in the back can buy my spot.

Intern #3: Someone can take your spot and then you can’t get one?

Daniel: No, they can actually go in front of me.

Noooo, don’t do that to us.

Smiley: Yeah, don’t do that.

Daniel: Someone in the back would pay a hundred dang dollars just to do that. They’d pay fifty dang dollars to get over here.

That’s true but then we wouldn’t get to hang out with you.

Smiley: Yeah, how would that make you feel Daniel?

Daniel: Someone would take my spot but I’d still have them.

Smiley: That wouldn’t be cool, I wouldn’t have one! You didn’t even know about the cronut before me.

Daniel: Well, the cronut is gonna be delicious. Ok. I will give whoever 10 dollars if they sell me a cronut. I give you ten dollars.

Intern #3: Those ten bucks would go to grandma!

Daniel: If I had a clone, someone could take my clone spot and he’d go all the way back there.

Touché. Now you gotta get a clone.

Daniel: If I had another clone, I could get four cronuts.

That’s true, you could probably sell one of those for a hundred bucks.

Daniel: A clone… for a thousand dollars!

A clone would probably cost you upwards of a million.

Daniel: Because that’s another person of you.

Smiley: That wouldn’t work, one of his eyes would be off or something, like when Stewie (from Family Guy) tried to clone himself. Remember that? [Laughs] Hey look, it’s Willy Wonka!

Daniel: I’d give him my cronut.

Smiley: He’s like I’m over it…I had my bagel. I’m just waiting.

Daniel: [to the interns] You’re gonna happen have a cronut smashed right before your eyes. That delicious cronut. The blackberry cronut. Well, I got to the cronut store and I’m not sharing.

Smiley: ‘Course you’re not sharing, your name is Daniel. That’s a girl’s name.

Daniel: Do not sass me!

Who could you sell it to?

Daniel: Everyone in this room.

Smiley: I’m gonna sell it to the trash man, because he’ll never get one. Who you gonna sell yours to?

Smiley: You sell it to a cop! Say, “Hey cop, wanna doughnut?” How much you want to bet that lady right there is a cop?

Intern: No, maybe she’s an employee.

No, she’s texting angrily. Also no one parks on this side of the street unless they want a cronut.

Daniel: They will get a ticket if they do that. But it’ll be worth it if she waits.

Well, she’s not going to get one if she didn’t wait in line.

Daniel: Oh, wah, wah, wah. I ain’t selling her mine. I’m selling mine to [the interns] because they can’t eat none. They just get to see it destroyed.

Smiley: I wonder if girls try to date [Dominique Ansel] just to get the Cronut.

Intern: They can’t be that worth it.

Daniel: No, they probably can.

Smiley: If you got the first, freshest cronut everyday.

Intern: He probably wouldn’t give it to you.

Smiley: “You have to love for me, not for my dessert!”

Are you turning me into an annoying orange?

[Dominique Ansel opens the door and people start filtering in.]

Smiley: Oh look, there he is!

Daniel: [points to the interns] So why are they smashing the cronuts?

I don’t know. For funnies?

Intern #2: Do you want the real answer or the cool answer?

Daniel: So they’re going to make you destroy the most delicious donut ever. I know each and every single one of you wants to eat one. I will split it.

I purchase my own cronut box and as I head back, the interns have their own cronut, carrying it on a plate with the same reverence as the Crown Jewels on a pillow. “They just gave it to us,” they said, pointing at Daniel, sitting in the back and cramming his small face full of cronut.