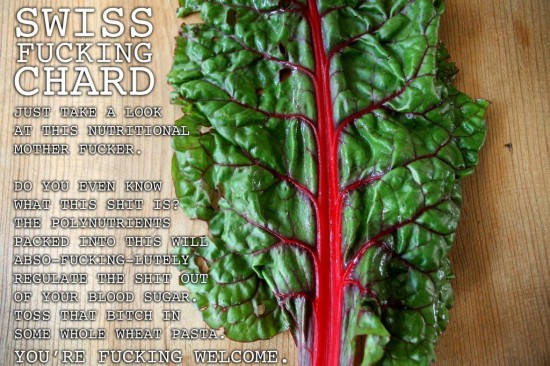 Actually, we can’t even feign surprise at this news.

Epicurious exposed the budding brand (with a cookbook in the works) and its founders to be two white millennials, Michelle Davis and Matt Holloway. They are anonymous on the actual blog, Thug Kitchen, but hung out with writer Matt Duckor, and are “unmistakably Thug Kitchen.” But really, are they?

Davis and Holloway told Epicurious they started the blog just to make each other laugh, while getting to the real point of a food recipe — no family-loving bullshit, not egotistical “look at me” shit, just straight food recipes. (With a side of many, many profanities.) But yeah, their revealed identities are causing a lot of fury from people who have every right to be furious.

We’ll hand it over to the very smart blogger, Maya K. Francis, at Very Smart Brothas to land our point:

It goes without saying that “thug” is a loaded word, which in our politically correct, post-racial society, has become the polite way to say “nigger” in mixed company. So the title that Matt Holloway and Michelle Davis chose for their food blog is deliberate. So is the voice. … It’s less important to argue whether or not Holloway and Davis could have gotten this deal if they were Black; rather, it’s important to recognize that they got it because no one knew for sure. Much like the race records of the early 20th century, making the race of content creators less conspicuous is a successful, tried and true marketing strategy — even as the product one is selling is culture.

The site’s humor, of course, is to be found in the stark contrast to perceived “thug” culture and refinement. The crudeness of the language and the life it implies, versus the sumptuous wholesome home goodness of domestic success. This is great, we are supposed to think. Because thugs don’t even know what garbonzo beans ARE! Black people only love collard greens! Those are the assumptions that hold the glue together. That, and the heavy borrowation of the voice that makes Ghostface Killah a joy.

If Thug Kitchen launched with Holloway and Davis’ pictures displayed prominently on the page of their blog, the blog wouldn’t have lasted long. Me, you, and everyone else with some melanin would’ve called it racist. It would’ve been over before it started, and just like we’ve done to Paula Deen, Iggy Izalea and every other imitator, we would have launched a full on attack. So instead, the couple allowed us to feast on the content, and send us home once we had our fill (and they had their page clicks.)