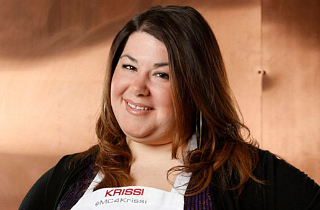 What is it with celebrity chefs and the “n-word” these days?! First, there was that Entire Paula Deen Thing, and now, we wake up to find that MasterChef Season Four frontrunner (both for cooking and for sass) Krissi Biasiello made some very public, very derogatory tweets about black people. The worst part is, she might actually beat Paula Deen in terms of nastiness. Where Deen’s racism comes off as misguided obliviousness, Krissi’s statements towards black people — in keeping with her character on the show as a verbal steamroller with an attitude — are of the blatantly hateful variety.

The Philadelphia website Daily News uncovered some Very Mean Tweets that Biasiello, a Philly native and paralegal, made back in 2012 (now deleted, because of course that’s what happens when people uncover one’s not-so-accidental racism). In the first one, she calls America’s favorite basketball league the “NBA = N***ers Bouncing Around”:

And the second one goes into the horrible Racially Driven Rape Joke category — “Better make sure you’re on top when sleeping with a black guy … Otherwise it’s probably rape” — which, really, NO:

As soon as the story broke, Biasiello quaintly deleted her personal account, but as these images show, deleting things from the Internet just doesn’t happen anymore.

Okay, to everyone we cover: moratorium on the n-word. Starting now. Shut it down. We don’t like calling people out for using the n-word, but neither do we like hearing people use the n-word either. Really, it’s all about saving yourselves from this kind of media pile-on.