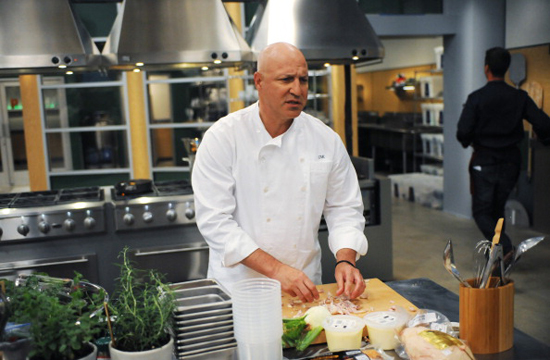 Though he’s known as the judge on Top Chef, ask Tom Colicchio to talk about ending hunger in America and he will blast through his points with the same passion as he does defending a dish at Judges’ Panel. We learned this when we caught him in the middle of preparations for the James Beard Foundation’s Silver Anniversary Gala at the Four Seasons Restaurant last Friday — when we revealed we wanted to talk about hunger issues, his face lit up and he veered away from a group of sous-chefs hovered around a cheese display. That’s how much he cared.

You’re one out of a very small number of chefs we’ve covered at The Braiser who’s actually been involved in food policy. A lot of chefs will use their fame as a public platform to support initiatives or politicians, but you’ve actually gone to Capitol Hill and testified in front of Congress. Now you’re involved with the Food Policy Scorecard. What pushed you into it to begin with, and what propelled you to become Top Wonk?

I got involved because my wife did a film called A Place At The Table — it’s actually coming out March 1st — it’s about hunger in this country. And Ken Cook, he’s the guy who started the Environmental Working Group, Ken is in our film talking about hunger issues and Ken started the scorecard. And so when Ken was doing it half a year ago, when he first started thinking about doing it, he pulled me aside and said “Will you join our board?” And he explained to me what he was doing, and so I agreed to do it. So that’s why I got involved. You’re aware of what we’re doing?

Yeah, we’ve covered it before.

It all kind of worked nicely, because we showed the film in Sundance. We went to another festival with it, and we actually just screened it a few days ago — the big question is, how can we help? But it sounds somewhat trite saying, “Call your local politician, because they want to hear from you”, especially when it comes to food bills coming up. There’s no way to find any information on that. You can go to some government website — it’ll take you forever.

So what this site does is that if a vote’s coming to the floor, and it’s food related, first off, we decide whether or not we can score it, and then we decide whether or not it’s good food policy or bad food policy, and then we score Congress on how they vote for the policy. We’ve already done it for the 112th Congress, and the votes are already done, so we did a summary of all of them and created the scorecard. But now, when that vote is coming, you can go to the site and we’ll push the information to you to try to get ahead of it, and then you can call your Senator and say, “I know this vote’s coming up, and this is how I’d like you to vote.”

The day we announced the Scorecard in Washington, I ended up going. I was at the press conference. Then we went to [House Minority Leader Nancy] Pelosi’s office and Rep. Rosa DeLauro (D-CT) — neither one of them were there, because Congress wasn’t in session — but their staffers were there. They didn’t score a perfect score, and they were all concerned about that. 30 people scored a perfect score. And some people scored really poorly. But they wanted to know “How could we score better?”

There were certain reasons why. There was one bill, for instance, that most Democrats voted for. It was the EPA. They wanted to increase the percentage of ethanol in gasoline from 10 to 15%, which is bad food policy, because it’s pushes money back into corporate corn farmers. Yet most Democrats voted with the EPA, because at the time, Romney was out there talking about eliminating the EPA if he got elected. So a lot of Democrats — even though it was bad food policy — they all had to go with the EPA. They got binged for that.

You really dove into the wonkishness of this entire initiative.

I don’t know whether I’d go that far, but we found out from making this film — in the four years it took to make it, and part of the reason we made a film — is that for 25 years, 30 years, I’ve been working and doing events like tonight for hunger issues. Our whole industry does; they’ve gotten behind the food and hunger movement, whether it’s Share Our Strength or various food banks. And it’s just getting worse. These organizations are doing great work feeding people, but at some point you realize that it’s not an issue of raising awareness, or trying to raise money, or getting food banks up and running. There’s a systemic problem here, and it’s really poverty, when it comes down to it.

When you realize this, there’s only one way to fix this. It’s government. Everybody’s out there on the side of small government, but when they see a storm blow through that completely wrecks the whole East Coast, they realize, you know — Chris Christie’s on the morning shows saying “This is what government is for! We need big government for this.” Yeah, I know we want to shrink government. But we also need big government to take people who are starving in this country.

50 million people a month struggle with food. 50 million families struggle to put food on their table for 17 million children. That shouldn’t happen here. And that’s something that government should take care of. It’s very easy to say “Handouts! Whatever.”  But it’s working families that are struggling. And so you realize that government can fix this. So you start looking at what government is doing, and then it leads you to, well, some of the things that I’m doing now.

I feel like a lot of people feel like that. You’re calling me “wonkish”? Michel Nischan knows policy inside and out. Bill Telepan, too. Mario [Batali] definitely raises a lot of money for food in New York, and other chefs too, but Michel and Bill are getting directly involved. I’m trying to figure it out on a different frequency, through government.

I’d actually go back and say that this is about values. What kind of values do you have? If your values are to believe that people who are less fortunate should have help, you should help feed them. If you look at it that way, it becomes about values: what you believe your government should do, and what they should do with your tax dollars. You get taxed no matter what. And do you want your tax dollars to go towards paying large corporate farmers to grow genetically altered corn? Or do you want some of your money going to small farmers, who are producing fruits and vegetables?

So do you think that this philosophical difference in values is why Republicans scored lower on the scorecard?

I think perhaps they’re voting for corporate interests, and not so much on actual policy that can help people. Sure.  And hopefully that can change. Again, it happened on both sides, where there are various interests that people try and protect. That’s how they vote. Rep. Jim McGovern (D-MA), who’s a huge champion of less fortunate people, he didn’t score 100% because of the EPA vote. Also, there are things that we didn’t score. The Ryan Budget, we didn’t score, because even though it would wreak havoc on SNAP and other programs, there was too much other policy in that bill. It became a footnote — not so much a factor in scoring.

Finally, a question about Top Chef: Who came up with The Twist?!

I did not. [laughs] You mean bringing the three back? I did not. Not sure I’m a fan of it.

I can’t say much, but every season we try to do something different, you know, mix it up a little bit. I wrote about it this week on my blog, so there’s the public record about it.