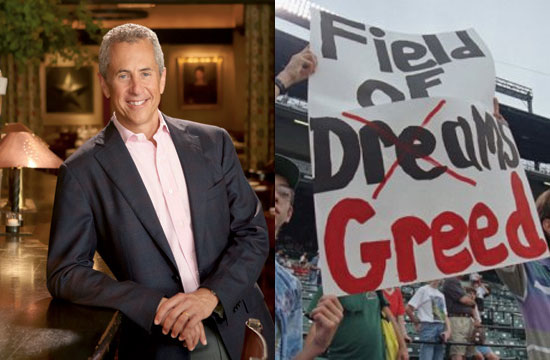 Today, Danny Meyer is a beloved restaurateur, as he was ten years ago, but back then he had struggles: in the wake of the 2001 recession and the September 11th attacks, he and the Union Square Hospitality Group had planned on opening Blue Smoke, a midscale, casual barbecue restaurant in New York City, and would have succeeded in making a splash — if they hadn’t forgotten that a 17-story smokestack would suck all that beautiful, meat-tenderizing smoke out of their kitchens.

“It was like blasting a hair dryer onto meat,” Meyer lamented to Jose Andres’s class at the George Washington University, and suddenly the press was doing the same to Meyer’s reputation: “‘Who do you think you are? You’re Jewish, you don’t know anything about pork!’ I promise you, I was getting everything every which way.”

But he had an ingenious solution to the negative press, and at the same time avert the 2002 Major League Baseball’s player strike, as he talks about below. It involves 20 racks of ribs, a late night meeting, and a keen observation that no one ever has an argument whenever they’re eating ribs:

“It just so happened that one of our regular guests at the restaurant had a senior job at Major League Baseball, and he said, ‘I dunno, it seems like a cockamamie idea to me. But if you’re not charging us, why not?’ So we sent them all these racks of ribs, and wouldn’t you know it — and I don’t think we can honestly take credit for this — it just happened to be the night that they solved the thing. They had a great time eating the ribs, they ate all of ’em.

“But somebody tells the story to Sports Illustrated, and Sports Illustrated, the next week, when they’re running the story of the solution to the strike, writes, ‘And it’s all because of the ribs at Blue Smoke.’ And that put us on the map! Can you believe the first good press we got was from a sports magazine?”

Check out the rest of his advice for budding young industry professionals below: