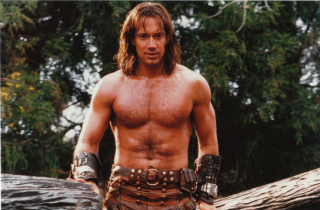 If there is a more predictable conservative trope than their contempt for “Hollyweird” celebrities and their liberal leanings, it is their slobbering embrace of any celebrity who remotely agrees with them. Case in point: Glenn Beck‘s TheBlaze, whose lead story today, entitled “Here’s An Actor Not Wild About Obama!”, features an exclusive interview with onetime Hercules: The Legendary Journeys star Kevin Sorbo, who, true to the title, is not wild about Obama. From TheBlaze:

Sorry, that’s not from TheBlaze, but it’s fair to say, from the site’s paraphrase-heavy interview, that Sorbo is a little bit disappointed with the President:

Clearly, Sorbo isn’t one for mincing words, calling political correctness a habit that is “absolutely destroying this country.” As far as President Barack Obama goes, Sorbo believes he “has one of the worst records” this country has ever seen, despite being elected to a historic second term.

The actor is well aware of the fact that his views separate him from other entertainers. After all, he doesn’t consider himself a part of the establishment. Plus, Sorbo admitted to TheBlaze that he’s been blacklisted by those who disagree with his politics. Considering his gripes, one might wonder why he continues acting — something he also addressed.

Sorbo goes on to explain why he continues to tolerate the horrible life of a Hollyweird actor, which you can read here. Part of it includes something about “Hollywood hypocrisy,” though, which is somehow different from the conservative hypocrisy that says George Clooney and Alec Baldwin should shut the hell up because they’re know-nothing celebutards, but Dennis Miller and Stephen Baldwin are movement rock stars!

Like many conservative “Hollyweirdos,” Sorbo chalks his career woes up to “intolerance” and a liberal “blacklist,” because when was the last time you saw a Clint Eastwood movie, am I right?