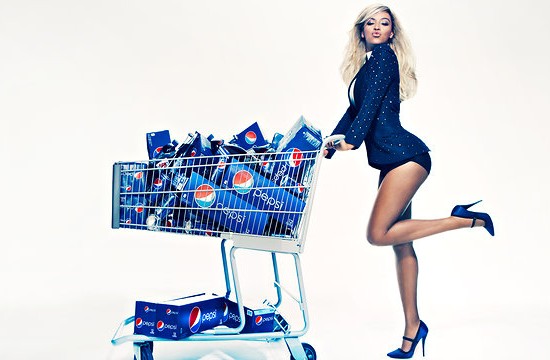 Ever since Beyoncé signed a massive endorsement deal with Pepsi totaling $50 million, everyone involved in the anti-childhood obesity movement has expressed shock and anger at Our Immaculate Lady Of Swag. Recently, Mark Bittman wrote a long op-ed in the New York Times criticizing her move, particularly given that she prominently participates in fitness and nutrition campaigns with her political counterpart Michelle Obama.

Bittman goes on to indict her for taking on a campaign that she didn’t need (she’s already famous, and Jayonce is worth a combined $775 million), signing on for reasons she couldn’t articulate (“Whether Knowles really believes in Pepsi’s public statement about what it stands for, about its ‘unique commitment to sustainable growth by investing in a healthier future for people and our planet’…is impossible to know”), and dabbling in hypocrisy even while asserting that Pepsi would allow her to go further in her artistic endeavors.

While it’s hard to imagine beautiful, perfect Beyonce doing wrong to anyone or anything, Bittman’s points resonate with anyone concerned about the growing childhood obesity epidemic. However, the point still stands: Mark Bittman is very upset with Beyonce, which no one ever thought could possibly happen with this beautiful angel.

Beyonce has yet to respond to these criticisms, so let’s watch her instruct some children in flash mob dancing to inspire them to get active in this video she filmed for Let’s Move!, only for the sake of sheer irony.