‘CSI: Boomer’ — Paul Krugman Gets Roasted for Walking Back His ‘Hacking’ Claims 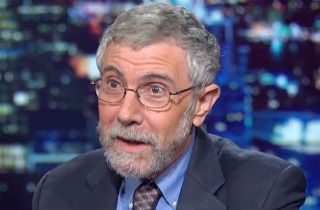 The 66-year-old Paul Krugman may be a Nobel Prize-winning economist and longtime New York Times columnist, but that doesn’t mean he’s immune from scams that target everyday senior citizens.

Hours after posting a bizarre notification on Twitter that someone hacked his IP address to “download child pornography” and alerting his followers that Times tech staff are “on the case,” Krugman deleted his original tweet and said he may be the victim of a scam.

Deleted original tweet. Times thinks it may have been a scam. Anyway, will have more security in future

The walk back by Krugman, a favorite target for derision by conservatives, unleashed a salvo of jokes at his expense, many of which referenced his generation’s less-than-savvy understanding of how the Internet works.

Paul Krugman is 100% someone who would get a ‘YOUR COMPUTER IS FULL OF VIRUSES’ pop up and panic.

Did Paul Krugman really win a Nobel Prize? He just seems like the sort of guy who regularly gets tricked by squirrels.

Not everyone found Krguman’s evident panic a joking matter, however.

“Paul Krugman is implicating himself by talking about being the victim of a crime” is not the funny or clever take you think it is.

Most likely, the Twitter hive mind concluded, Krugman fell for a common online scam that tries to trick users into compromising their computer security through a misleading pop-up that directs its victims to call a phony security center where people are warned about IP address hacking to “download child pornography.”

As much as people want to conjure up conspiracy theories based on Paul Krugman’s tweet, the most likely scenario is that he fell for this well known scam. https://t.co/TWf1i2Jjfm pic.twitter.com/Q1FquxaIic