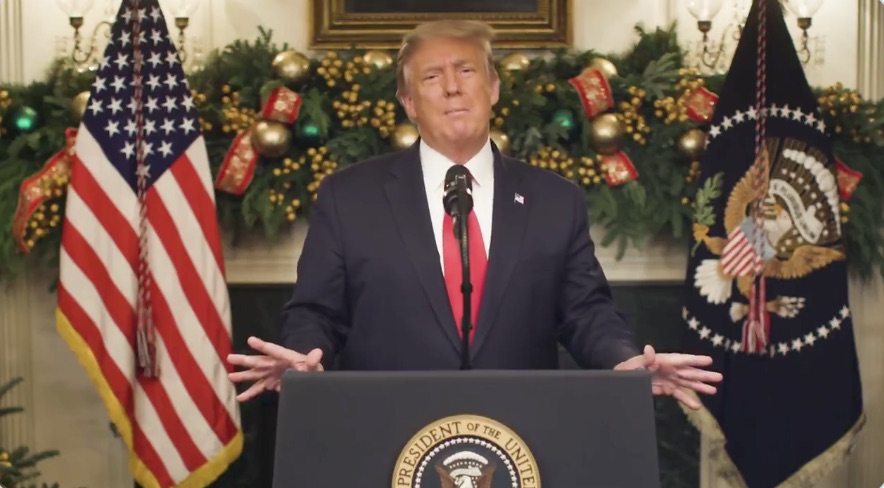 President Donald Trump, in a surprise, last-minute video, completely upended weeks of Congressional negotiations by shooting down the just-passed $900 billion Covid relief bill and demanding an amendment that increases the direct payout from $600 to $2,000 per person before he will sign it.

A bipartisan House and Senate negotiation finally settled on the terms of the latest round of coronavirus  stimulus — talks that the White House had largely been absent from. But Trump was expected the sign the legislation by the end of the day on Tuesday, so that the first stimulus checks might reach struggling households before the New Year.

By throwing down the gauntlet of an implied veto of the current bill sitting on his desk, Trump has injected volatility to a process that both parties had been hailing as a positive return to working across the aisles. It also sets up the possibility of a quick — and embarrassing — game of chicken between Trump and Congress, since both the House and Senate passed the Covid relief package on Monday night by hugh, veto-proof margins.

Calling the Covid bill a “disgrace,” he cited many foreign aid and domestic spending programs that were, in fact, included in the $1.4 trillion government spending bill that was partnered with the Covid relief bill. Trump, apparently not recognizing this basic bit of legislative reality,  said “it has almost nothing to do with Covid.”

“Despite all of this wasteful spending and much more, the $900 billion package provides hard-working taxpayers only $600 each in relief pay,” Trump said. “Not enough money is given to small businesses and, in particular, restaurants, whose owners have suffered so grievously.”

The House Democrats’ HEROES Act, passed last spring, included $120 billion in relief grants for restaurants, but that measure was stripped out as part of the compromise with Senate Majority Leader Mitch McConnell (R-KY).

“I’m asking Congress to amend this bill and increase the ridiculously low $600 to $2,000 or $4,000 for a couple,” Trump said, before issuing a not-so-veiled threat to veto the current, already-passed version of Covid stimulus. “Send me a suitable bill or else the next administration will have to deliver a Covid relief package.”

And then revisiting the near-sole focus of the final few weeks in his presidency, Trump added: “And maybe that administration will be me.”