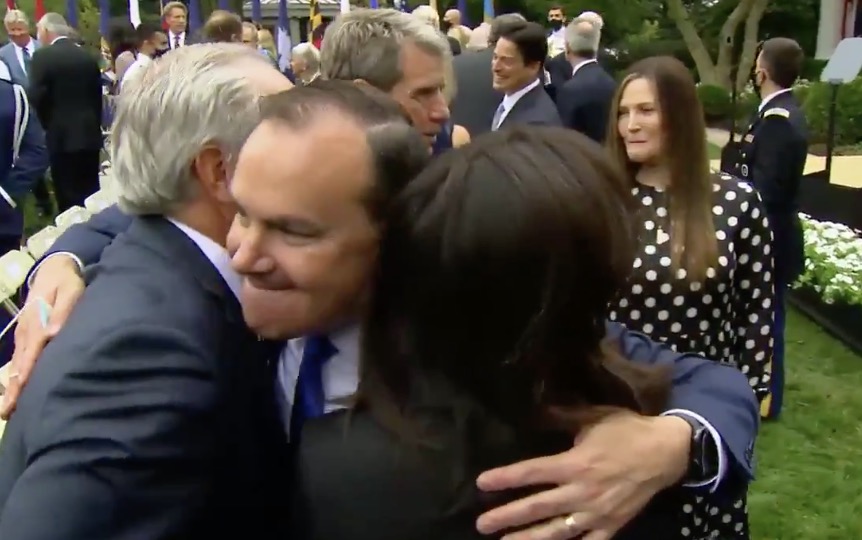 Since then, video has emerged from the weekend White House ceremony in which Judge Amy Coney Barrett was formally announced as Trump’s third nomination for the Supreme Court. The video shows a largely unmasked group of officials in the Rose Garden, not socially distancing, and Senator Lee hugging many individuals in celebration of a newly nominated conservative justice. Watch the video below:

Video of the ACB announcement event on Saturday at the WH featuring Sen. Mike Lee of Utah, who has now tested positive for Covid-19. pic.twitter.com/aCqP2JCH73 via @bubbaprog

Seeing as there is a seeming spate of cases to emerge (Notre Dame president Father John Jenkins is another attendee who tested positive), some are suggesting this Supreme Court shindig was a super spreader event. Predictably, the reaction on Twitter has been a Rorschachian mix of humor, schadenfreude, and sadness. To wit:

Can’t stop watching this. It’s like watching one of those Netflix dating shows taped pre-Covid where you wince every time they come within 6 feet of each other, but it was…last weekend. https://t.co/8Wfs68Zhky

Mike Lee hugs as many people in this 5-second clip as I’ve hugged in 7 months. https://t.co/seKBNQ7KVY

I know Mike Lee. I like Mike Lee. When I was in Congress, I worked with Mike Lee on stuff. But this is just so fucking irresponsible. He’s walking around the White House lawn like it’s 2017, not 2020. No mask, hugging, kissing, shaking hands. Come on Republicans, wake up. https://t.co/kySavQWQ3c

WHAT KIND OF MONSTER THROWS THE DOUBLE HUG IN 2020? So much touching acquaintances. (Wishing Mike Lee his health, and not just because calling Mitt Romney junior senator is fun for everyone.) https://t.co/kky9gGgIEc

So, this is GOP Sen. Mike Lee, who tested positive yesterday, hugging people at the WH last wknd. I haven’t hugged my best friends in 7 months. I absentmindedly hugged one friend I hadn’t seen for a long time and felt so awkward about it. (Sorry, @alexskaplan!) https://t.co/NV8HENjOI1

Video of Republican Sen. Mike Lee, who has now tested positive for the #coronavirus, without a mask on and hugging people at the nomination ceremony for Amy Coney Barrett. It’s nearly impossible to know if he was already contagious at this event. pic.twitter.com/xiD3lmFPYh