15 Minutes of Lame: A Guest Column by Stripper Lynsie Lee 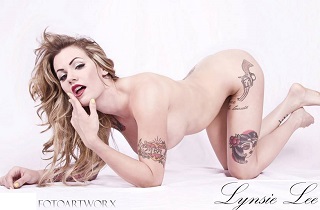 A few weeks ago, stripper Lynsie Lee became the subject of intense media attention over some private Twitter messages that she had shared with Newark Mayor and US Senate candidate Cory Booker (D-NJ). Those months-old messages pushed her, reluctantly, into the spotlight. In an exclusive guest column for Mediaite, Lynsie talks about her experience in the glare, the attitudes she has encountered, and what is truly important to her.

It all began with a direct message on Twitter. No, not with Mayor Cory Booker, as everyone would like to believe. The more relevant messages were actually exchanged with Benny Johnson from BuzzFeed. For some reason or another he had messaged me, asking a few questions about a screen cap that I had posted publicly last February. The screen cap, as you’re all aware by now, was an innocent yet charming flirtation I had had with the mayor at the beginning of the year. Fast forward nearly eight months and now I am being asked about it.

Since I saw the flirting as innocent and non-detrimental in any way, shape, or form, I answered his friendly questions, and that was that.

I start getting notices on twitter from my friends, linking me to the Buzzfeed article Benny had written about my and Cory’s ancient exchange. I read it, although it was mostly images, and found it funny. Benny, jokingly, compared my and Cory’s Twitter lives, and used the flirtatious screen cap as a premise for a pseudo relationship. It was cute and, to me, satirical — perhaps even making fun of previous political scandals, since this was obviously nothing serious.

And just like my gun tattoos, the media did what it does best and shot from the hip with this story.

At midnight, calls and emails start pouring in from reporters. It was surreal. How could something so simple be seen as a scandal? Oh wait, I’m a stripper and nude model (how dare someone flirt with my kind!). More importantly, how did they get my telephone number??

A common misconception from this entire ordeal is that I “released” the screen cap to the media, or that I was trying to sabotage Cory’s career. Not true at all, and if they had read the original BuzzFeed piece they would know this. I’ve been asked why I agreed to do interviews if I wasn’t seeking attention, and the answer is simple: because there was nothing to hide, and I didn’t want Cory’s career to be ruined by hypothetical nonsense.

After I had been seen on many news outlets, people in my personal life began telling me to “strike while the iron’s hot” or to “milk this for what it’s worth.” No thanks. If I ever wanted fame, this was not how I wanted it. Plus, after just two days of reporter interviews, I was exhausted. I’m a single mom and still had to go to work at night, and answering the same questions to reporters all day was wearing me out. I didn’t want 15 minutes of fame, I wanted a two-hour nap!

By the end of the week I had been in every major newspaper, and several well-known shows. Nightline even contacted me about coming to do an in-depth view of my life, and sent me a mini-cam to film narratives prior to their arrival. After the government shutdown (real news), they postponed, and will probably not come at this point. But I still have this mini-cam, so maybe I did get some milk from the teat of this non-scandal?

With the media and public realizing that it’s okay for two single people to flirt online, “journalists” started grasping for straws. Gawker released a story about the friends I met up with in New York, targeting one of them who seems to be a big deal in social media there. That really pissed me off. The article basically implied that since I am a stripper, anybody I associate with is a bad person, especially men.

I am a very proud, outspoken stripper. I love my job and the income and free time it provides, especially as a young, single mother. To say I can’t have friends because of what I do for work is absurd. Of course I hang out with people who make good money, because I do, too! I was in New York for my birthday and wanted to see some people I appreciate and am on the same level with, intellectually as well as financially. So, fuck you, Gawker and your puritanical bullshit.

Anyway, back to the story.

After the news had spread around the globe (yes, even Australia had seen me on TMZ), my Twitter follower numbers began to rise. People fell in love with who I was, and that’s the part I enjoyed. Many people even confessed that they didn’t know who Cory Booker was, but they were glad that they found out who I was. That made me happy. I didn’t want notoriety as some scandalous political life-ruiner, I just wanted to be myself. And luckily that has been the end result so far.

The non-scandal did have some pluses on my part. I shot for Hustler in August and once the news hit, they decided to give me a bigger spread; which is awesome. It also connected me to some new, amazing people I never would have met before. Most importantly, though, it made me realize how much I enjoy my life as a mother. I got approached by several booking agents who wanted me to do a national tour as a stripper, even had fans begging me to visit their towns, but my role as a mother is more important than any amount of money. I want to be there for my daughter when she gets out of school. I want to pack her lunches myself and brush her hair. Maybe a few years ago, when she was younger and I was unhappily married and broke, I would have jumped at the chance. But now, at this time in my life, I am content with my daily routine, and would hate to miss any important events my daughter may encounter.

That said, there are a few things I do want to come from this. I want Cory Booker to win the Senate election he has been campaigning for. A politician is supposed to represent the people — all people — and yes, that includes strippers. His kindness toward me and everyone else he engages with on social media proves his caring and generous nature. It proves that he is the perfect candidate to represent the people of New Jersey and, I hope one day, the people of the United States.

I would also like our society to realize that strippers, or anyone in the adult industry, are real people, with real lives and real human relationships. What we do for income doesn’t mean we are doing those things 24 hours a day. Accountants don’t sit at home with calculators at the dinner table, nor do proctologists go around sticking their fingers in people’s butts at the grocery store. Being a stripper means that I am comfortable performing a job that requires nudity, it doesn’t mean I am grinding street poles or flashing my boobs at the gas station when my tank is empty.

Most importantly, no single person should be judged for flirting with another single person. Yes, Cory is a politician and I am a stripper, but who cares? If anything politicians and strippers should be dating, our jobs are alike in very many ways.