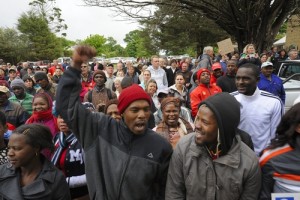 President Barack Obama hasn’t officially announced whether or not he’ll be visiting Kenya during his tour of East Africa on July 22 and 23. However, rumors have circulated that the Hawaiian-born politician with paternal roots in the country would make a stop — especially after a Kenyan Airways official allegedly leaked Obama’s itinerary. Whatever the case may be, the members of Nairobi’s Republican Liberty Party will be there to greet him.

That’s because, according to The Nairobi Times, the president’s visit has caused some consternation among Kenyans following his vocal support for the recent SCOTUS ruling on same-sex marriage. Although the country absolutely loves the fact that one of its own (albeit through familial relations) attained the highest political office in the U.S. executive branch, Kenya prides itself on being a very conservative African nation. This is especially true when it comes to same-sex marriage.

So in a letter addressed to Nairobi’s Police Commandant, party leader Kidala Vincent wrote that the RLP “shall hold a peaceful procession”:

“The procession shall be carried out by approximately 5,000 totally naked men and women to protest over the United States of America President Barack Obama’s open and aggressive support for Homosexuality.”

A naked protest. A “totally naked” protest led by about 5,000 men and women, that is. That’s how the RLP plans to counter Obama’s fabulously gay visit to the city — if he even comes to Kenya at all.