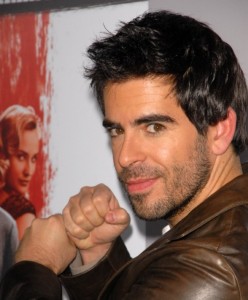 I have never seen a movie by director Eli Roth. That’s not entirely true, I have seen clips from a movie by Eli Roth, since I saw (and loved) Inglorious Basterds which not only features Roth as the infamous skull-cracking Bear Jew, but also features his directorial handiwork on the film-within-a-film Nazi propaganda movie “Nation’s Pride.” If you haven’t seen Basterds you might not get this but honestly, what is your problem? It’s a GREAT movie and you should go right now and buy it on DVD, which coincidentally is now possible because the DVD came out today.

But anyway, back to Eli Roth. So, I have never much liked horror movies, and his particular brand of movie — dubbed “torture porn” by New York‘s David Edelstein, which has stuck as the name of the genre, with him at the head — seemed like a clear miss for me. (Never mind that I have since learned that he is involved in the remake of the horror movie that pushed me over the edge back at a sleepover party when I was 11.) But then I got into a debate about it with a good friend, who bitched me out for taking such an extreme position without actually having seen his movies. She had a point. So, what I have seen: Inglorious Basterds (which I loved and in which he was not un-handsome), a commercial he did in support of PETA, the “Thanksgiving” trailer (okay, admittedly through squinted eyes — but hey, I turn off CSI too), an interview where he talked about having Quentin Tarantino over to his family’s house for Passover, his interview with my friends Ronna & Beverly at the UCB in Los Angeles, his Twitter feed, and “Jew/Not A Jew” yesterday with Harvey Levin. So — my interest in highlighting him on Mediaite is an educated, informed and evolved one. Also, maybe he can introduce me to Til Schweiger.

Actually Roth is a pretty interesting new-media animal — he’s taken to Twitter like a duck to water, used his MySpace page as a forum for complaining about piracy issues, and recently engaged in what he described as “one of the funniest, weirdest social experiments ever” with his fans (who are very devoted, and call themselves “Blueberries” — seriously). The experiment was cybersex en masse via the blog Oh No They Didn’t, and included phrases like “Blueberry pics got me twittering one handed.” The way Roth uses the internet to challenge the usual fourth wall is interesting, and the kind of access he provides is all the more so as his star ramps up as Basterds begins its high-profile march towards Award Season. Love him or hate him — and if there’s one thing the Internet will tell you, there is passionate feeling on both sides — but Eli Roth is one interesting mofo. Also, he’s made his Papa so proud. I thought he’d be a good interview and I was right, so please enjoy his NSFW entry into the canon of our 5QQ – Five Quick Questions.

This might seem old fashioned, but I have a troubadour who shows up at my house in pantaloons playing a lute, and he serenades me the morning news while I have my oatmeal. It’s this guy Steve, from Pomona. It’s a service he does for a lot of directors, you’d be surprised.

Scarier in a dark alley: Cnl. Landa or the Bear Jew?

Bear Jew. Landa doesn’t like to get his hands dirty, unless you’re a double crossing German movie star. Then I’d watch out.

Scarier in a dark alley: You or Harvey Levin? (It appears you share a trainer?)

Me. Then again, Harvey has terrified me by jumping out with a camera before. I think it’s a pretty equal matchup, we’re both scariest when we have cameras in our hands. But I’d like to say I’m scarier because I know it will irritate Harvey slightly. 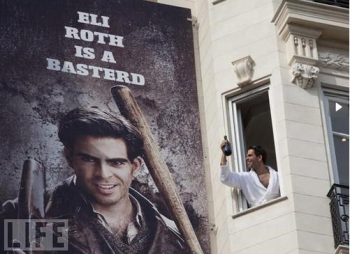 Saw or Friday The 13th

Friday the 13th. Jason can’t be killed, although Jigsaw tends to do his best work from beyond the grave, so after the match Jason’s kind of fucked.

vs. the winner of

The Shining or Jaws ?

The Shining. I’d put that weird bear man against Bruce the shark any day. And Jason wouldn’t last two nights in that hotel.

Battleship Potemkin or Why We Fight

Battleship Potemkin. People are still imitating the Odessa Steps scene, I actually gave it a nod in “Nation’s Pride” with the baby carriage sequence. (Which you can see in its entirety on the DVD – out today! Ahem.)

vs. the winner of:

Triumph of the Will or Starship Troopers?

Starship Troopers. No disrespect to Frau Riefenstahl, but that scene at the outpost trumps all that pageantry shit. And I’d put the bugs against the baby carriage any day, the bugs would totally suck that baby’s brains out.

Quentin Tarantino on Passover or Christoph Walz on Yom Kippur?

Tough call. Here’s the difference, on Passover we’re teaching Quentin things, and on Yom Kippur we just sit around and listen as Christoph schools us all in Judaism. The guy knows more about anything than anyone I know. I’d say Quentin on Passover because at the end of the night I feel smarter, and with Christoph I get depressed at how little I paid attention in Hebrew School.

Who would you rather cast, Bill O’Reilly or Glenn Beck?

O’Reilly. If only so I can put him in a scene with a chimp and watch it rip his balls and face off.

Tiger Woods. I can’t believe nobody’s talking about this. 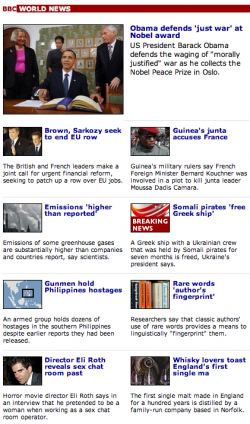 5. Are you nervous or excited about the future of media? Why?

Nervous. We’re fucked. There are zero standards for journalism anymore. Nobody fact checks anything. Not only that, what qualifies for news is terrifying. I talked about how I briefly worked as an online sex operator in college to pay for my student films and it wound up on the home page of BBC World News. I’ve been talking about this for years, it’s on my IMDB page, but suddenly now the news on Earth was so slow this became a top story. It’s both hilarious and terrifying, and oddly flattering.

I do think that once the world implodes and all forms of communication are decimated the only way we’ll have to communicate is through storytelling, poetry, and song. That’s why I have a Troubadour now, I actually feel I’m living ahead of the curve.

Bonus question: As you know, I am scared of horror movies. As you also know, I have sworn to watch at least one of yours. I will let you pick. Which one? (p.s. Am I allowed to watch on mute?)

Well, I guess I deserved that. Okay, “Nation’s Pride” on the Inglorious Basterds DVD it is! Seriously, it was awesome, and I can’t wait to watch it again. Thanks to Eli Roth for his typical frankness. More where that came from in a few collected videos on the next page.

>>>NEXT: The Bear Jew, and also, Pesach with Quentin!