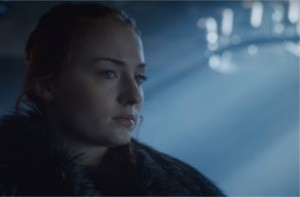 Spoilers for Game of Thrones Season 6, Episode 7: “The Broken Man”

“Violence is a disease. You don’t cure a disease by spreading it to more people.”

“The Broken Man” is perhaps the first episode of Game of Thrones to so completely take the reckoning of the violence, the extremism, and the misery and that has been wrought on the continent of Westeros.

It proposes solutions of escape from this cycle of violence — such as grace, religion, and forgiveness — only to cannily exposes them as alternate means of achieving the same goals. There is no escape from the patterns of brutality, only transitions. You can try to sidle your way out, but we are all stuck in the same world, and it understands that the only response to violence is more violence.

Each episode’s title usually provides a fairly unambiguous window into its principle themes, and “The Broken Man” is no different. Jaime is a broken man, his hand severed by the resentful hunter of House Bolton, Locke, in Season 3; he stands at the gate of Riverrun, parlaying with the Blackfush, enfeebled against the prospect of a long-term siege. Theon is also a broken man, neutered and shattered by years of abuse, scarcely able to down a pint with his sister, even as they galavant with the whores of Volantis on their way to a certainly victorious unification with Daenerys.

And then, of course, there’s Sandor Clegane, who is, surprise!, alive. (Protip: In a show that has no qualms whatsoever with showing the gruesome deaths of beloved characters, if someone “dies” off-screen, assume they’re alive.) The Hound, whom we last saw bleeding out following an ugly duel with Brienne of Tarth, is apparently breathing just fine and being guided into the Faith of the Seven by Guest Star Ian McShane, portraying a reformed sell-sword or warrior or master-at-arms or who-knows-what. The point is, he is an instrument of the death and theft and rape and violence that has been inflicted time and time again upon this miserable continent. He has tried to make a clean break as a Septon of the Faith, but of course, it’s a futile endeaveor, because even when you throw down your sword and become a man of God… there are always other Gods.

So it is in the episodes’s final scene, which is perhaps perfunctory, but still grisly, in which the acolytes of the Lord of Light set upon the little band of Seven worshippers and slaughter them all in their tracks. (Why didn’t they burn them? I wonder.)

Religious extremism has never been far from the show’s focus. We witnessed the Lord of Light’s priestess roast innocent children alive, and now their roaming missionaries butcher men, women, and children by the dozen. But of course, as noble as the Septon played by McShane was, espousing the virtues of tolerance and nonviolence, it is important to remember that any religion, given an iota of power, is utterly toxic. The Faith of the Seven in King’s Landing, newly institutionalized as the state religion under the lecherous guidance of the High Sparrow, is showing its true colors. The Faith betrays many of the same conspicuously misogynistic signs of its real-world counterparts, as when the High Sparrow all but forces Queen Margery to get into bed with the king, saying, “You have a duty, your grace. Congress does not require desire on the woman’s part, only patience.”

Echoing Jaime’s charge to the High Sparrow that Cercei only had to make her walk of shame because she was a woman, the Faith seems implicitly set on punishing and controlling women; meanwhile the Faith of the Lord of Light seems intent on burning and murdering all those who don’t subscribe to its precepts. The most obvious avenue to escaping the cycle of violence — religion, that is — is itself besmirched with murder, desecration, and subjugation.

Clegane’s re-appearance does confirm the theory that he will be the Faith’s champion in the Trial by Combat for Cercei’s soul; he will be facing off against the reanimated Mountain because, of course, the only god everyone serves in Game of Thrones is the god of Drama, and what could be better than a good ol’ smash-up between the two Clegane brothers, both resurrected in his own way?

Meanwhile, the forces of the north are trying to establish an army to challenge the Boltons at Winterfell. (The 10-year-old running House Mormont was the obvious highlight of this episode.) They have assembled the Wildlings (or Free Folk) as well as some other minor houses, but it is still an uphill battle. And, across the Narrow Sea, Arya has been repeatedly gutted by a Waif in a borrowed face.

The title of “The Broken Man” refers, ultimately, not to any single character — but to an entire world, beaten and tortured and mutilated and shattered, left decimated and violated by war, rape, and torture. The elements that might deliver us out of this cycle of violence — namely, belief in a higher power, like the Seven or the Lord of Light  — are themselves merely banners. Like the Starks or the Boltons. They too have their words and their symbols. They too are just emblems of control — as good as any — under which to die.