A Reluctant Defense of Nancy Pelosi 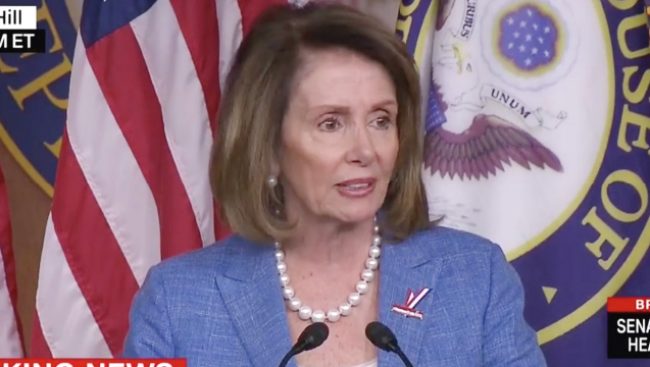 Pelosi is undeniably problematic, but nonetheless, Democrats should take a step back and give her situation as an (unsurprisingly) detested woman in a position of power some more thought before driving her out, prematurely.

Those perceived as members of the “Democratic establishment” have always been unpopular among progressives seeking to rebrand the party, but criticism of Pelosi has never been so sharp and vitriolic. Some are calling Pelosi’s leadership “toxic,” or saying “you’d have to be an idiot to think we could win the House with Pelosi at the top.”

And it’s not even just her fellow Democratic lawmakers — a 2013 Gallup poll found Pelosi was the best known but least liked Congressional leader, and polling from earlier this week found that she had a lower approval rating than President Donald Trump.

Pelosi certainly has her problems — this is one of the few things Republicans and Democrats can agree on. Her recent comments that abortion is a “fading issue” that Democratic lawmakers shouldn’t be expected to support was concerning for progressives — if Democratic leadership is willing to look the other way on women’s rights, then what next?

There’s also the fact that she is, undeniably, a liability for the party at this point. The newly elected Karen Handel ran numerous attack ads targeting Pelosi that seemed to write themselves, and we can’t forget that she won.

Slate notes that, “Republicans will still call Democrats out-of-touch limousine liberals with San Francisco values even if Nancy Pelosi is not in charge.” But Pelosi is so deeply entrenched in this narrative; she’s been so demonized by Republicans, for so many years, that her presence could likely make it difficult to win over new blood.

And yet, earlier this week in the face of the Democratic party’s special election losses, Pelosi remained outwardly optimistic. She reminded her party that despite these losses in red states, various data points suggest the Democratic party is still poised for a substantial 2018 surge.

The Wonkette has some theories about why Pelosi is being scapegoated despite the fact that all is not lost for the party — far from it, actually.

“What good are they even? ‘Facts’ are for the ‘establishment,’ a convenient label we use for whomever we feel like attacking that day!” Evan Hurst writes, in a scathing defense of Pelosi laced with sarcasm. He’s referring to Pelosi pointing out that it’s hardly time for Democrats to panic, that contrary to media narratives, they’re not doing too shabby, at all.

“Sure, Republicans have a convenient foil in Nancy Pelosi, but if she’s removed, they’ll just find a new foil,” Hurst notes, and, emphasis added, continues: “Look how they shush Kamala Harris and call Elizabeth Warren “Pocahontas” and how Fox News is never more than one rage fit away from calling Maxine Waters the N-word. Wonder what all those women have in common, oh that’s right it’s being women.”

Something else they all have in common — they’re women in positions of power, and at a time when countless men in more traditional parts of the country continue to struggle amidst economic frustrations in their pursuit of the American dream, seething in quiet rage that women should achieve excellence while they, men, continue to struggle. As was likely the case with Democratic nominee Hillary Clinton, this gendered frustration adds a whole other dimension to their hatred of these female members of the liberal elite.

Perhaps that’s one of the reasons “Make America Great Again!” resonated with so many in this demographic — they wanted to go back to a time when men were in the driver’s seat, when men were the powerful ones. And until we’re transported back to that time, women like Pelosi are perceived as threats, the enemy.

It’s a tale as old as time.

I’m not saying there are 0 reasons to get rid of Pelosi — just that it would be awfully backwards and disappointing if satiating the sexist and small-minded were the sole one.

After all, are there legitimate reasons to be critical of Pelosi? Absolutely. But there’s nothing to justify the complete and utter demonization of her. Pelosi is widely regarded as a strong legislative strategist, a smart, savvy leader. Democrats would be wise to think twice before driving her out prematurely, and give in so easily to a tide of sexist hatred.