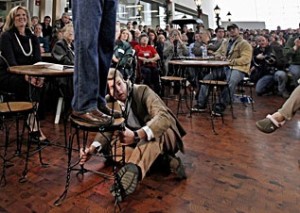 Earlier today, Mother Jones‘ Kevin Drum posted this “Photo of the Day” of an unidentified man whose job it is to stabilize GOP candidate Mitt Romney‘s chair while he speaks to a crowd on the campaign trail. At first, I thought he might’ve been a network camera crewman steadying Mitt for a TV stand-up, or a member of The Adjustment Bureau who thinks he’s invisible, but NY Mag‘s Daily Intel blog has identified him as Garrett Jackson, Romney’s “body man” for the past year.

While the chair-holding gig might make for a decent pick-up line (“Why yes, I am the Romney campaign’s chair man…”), it turns out Garrett is more like a Farnsworth Bentley to Romney’s P. Diddy (Jerome Benton to Romney’s Morris Day, for you older readers). From Daily Intel:

Every big-time politician needs a body man, a personal aide who can be counted on to take care of anything and everything the boss requires.  President Obama has his Reggie Love, or at least he used to. Mitt Romney has 2009 Ole Miss graduate Garrett Jackson, who, according to an article in his hometown Daily Leader, has been at Romney’s side since the candidate’s No Apology book tour last year.

All joking aside, the picture is a terrific encapsulation of the stagecraft that’s usually just out of the average person’s view. It reminded me of the way the crowds were arranged at the first campaign event I ever covered live, where humanity simply ceased to exist at the edge of the TV camera’s view. Kudos to Jackson, and all of the other unsung campaign heroes who make our enjoyment of this game possible.