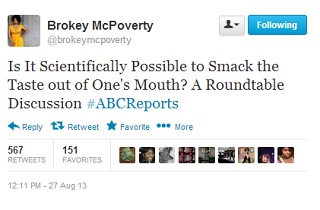 It’s tough to tell just how self-aware ABC News’ bit of straight-faced click-bait is, but the brief piece fails to deliver on its promise of a scientific explanation of twerking:

Twerking is such a complex, technical subject, only a Ph.D. researcher can explain how the body does what it does to make it happen.

Twerking is a combination movement involving a deep squat and a pelvic tilt, Michelle Olson, a professor of exercise science and a certified strength and conditioning coach at Auburn University in Montgomery, Ala., explained.

“You take a wide stance with your legs turned out at 10 and 2 so your hips are externally rotated,” she said. “Then you pulse up and down as you thrust the pelvis bone forward and back.”

That’s more of a description than an explanation, but who am I to quibble with the Twerking Headline Heard ‘Round The World? A Twitter user named Brokey McPoverty is credited with starting the #ABCReports hashtag, and now, like the Geto Boys, it can’t be stopped (film at 11):

Brokey McPoverty: Is It Scientifically Possible to Smack the Taste out of One’s Mouth? A Roundtable Discussion #ABCReports

ArmedPropaganda: “Oh No She Didn’t!: What To Do If She Did” #abcreports

Trudy: OPP: How African Americans Embrace Polyamory Through The Teachings of Naughty By Nature #ABCReports

Nostradeptus: #ABCreports Because you put Walnuts in it. Why your holiday dressing isn’t eaten by your Black friends.

The hashtag even got love from Michelle Malkin’s Twitchy, in a rare non-screechy post. Liz Neporent, meanwhile, appears to be unaware of the joy she’s created, if her Twitter feed is any indication. That’s a shame, because if she thought up that headline, she’d probably have some really funny #ABCReports tweets.

As much fun as this was, I would advise ABC News to go with a different expert the next time twerking becomes a subject of national debate. I suggest South Bronx choreographer TweetBoogie, whose expertise in the applied science of twerking is hard to argue with (and before you ask, yes, I tried it, and yes, I was working it):